Walking into Cleveland Metroparks Zoo, the vibrant, pink feathers of the flamingos stand out against the deep green leaves, and the roar of Doc the lion can be heard up to five miles away.

We use our senses, such as sight and hearing, to navigate the world around us. Animals, too, use their senses to find food, avoid predators and even survive in the wild. In your Zoo, animal senses are used to communicate, observe and thrive.

Here are a few examples of fascinating animal senses. 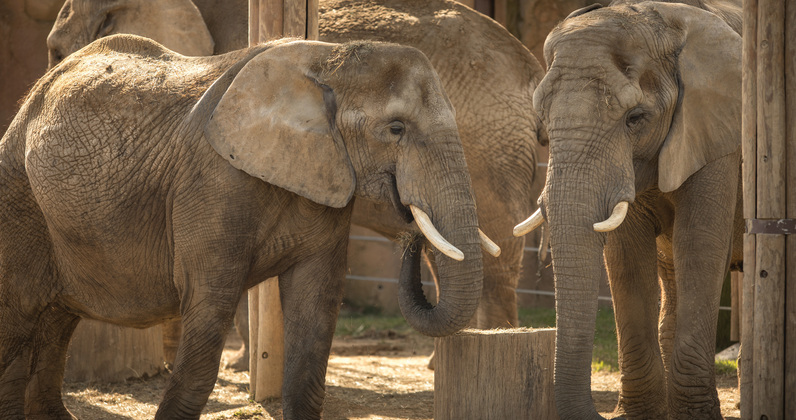 Our regal African elephants communicate using incredibly low rumbling sounds that cannot be heard by the human ear. These rumbles are carried through the air as sound waves and also through the ground as seismic waves. The elephants feel the seismic vibrations by using their trunk and their feet. Concentrated at the tip of their trunks and on the heels and toes of their feet are very sensitive receptor cells called Pacinian corpuscles. Scientists believe that these cells are the way elephants can sense faint vibrations.

This seismic wave detection can enable elephants to “hear” other elephants at a great distance or through very dense vegetation. They can even detect underground water sources by using their trunks to feel for the vibrations of water movement.

In addition to the low rumbles, elephants also make sounds in higher frequencies. They may sound like a bark or a grunt, a trumpet or a snort. Researchers believe that these snorts and grunts are distinct calls, which elephants understand to mean different things. 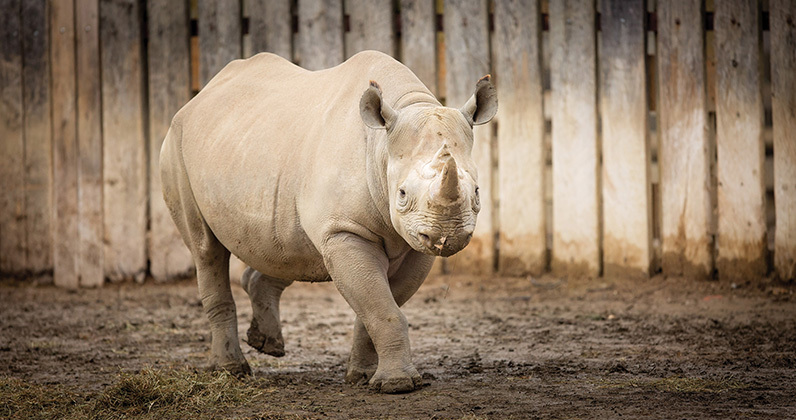 Stop and Smell — the Rhinos?

Black rhinoceros have a wonderful sense of hearing as well. Watching them from the observation deck next to the Sarah Allison Steffee Center for Zoological Medicine, Zoo guests might see their cup-shaped ears swiveling around to pick up sounds. Even when rhinos are sleeping, their ears will continually move and swivel!

But the real star of the rhino’s senses is its sense of smell. Black rhinos, like the ones in Cleveland, seem to have a better sense of smell than white rhinoceroses based on the increased size of the piriform cortex, the part of their brain that processes information from their sense of smell.

Not all rhino sense are strong, however. The black rhino sense of smell and hearing make up for the fact that they have considerably bad eyesight.

Rhinos are thought to be near-sighted, though some research has shown them to be far-sighted as well. They would not be able to tell the difference between a tree and a person standing roughly 100 feet away. Rhinos are notoriously aggressive in the wild — which is not a good match for a large animal with poor eyesight! — so it is not unusual for them to charge a rock or a tree, thinking it might be a threat. 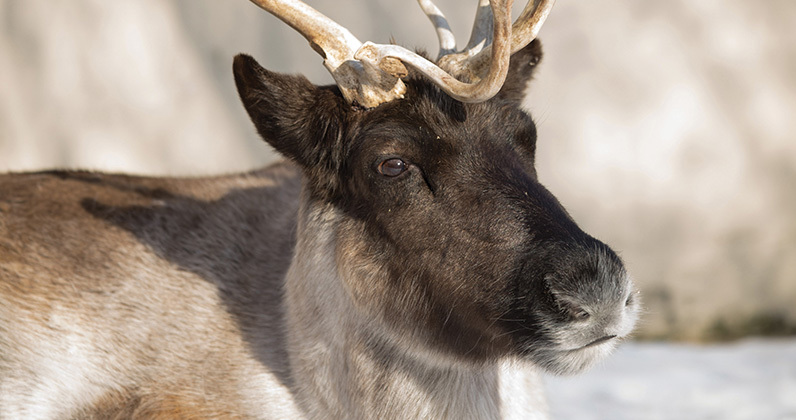 Reindeer of a Different Color

Reindeer like the ones in Wilderness Trek have an extraordinary optical adaptation. In a reindeer’s eye is a special membrane called the tapetum lucidum. This membrane is made up of special cells that reflect light into the eyes for a better chance of catching more light. You can see the tapetum lucidum at work when you shine a light into a dark forest and see a pair of eyes, perhaps deer or raccoon, staring back at you.

But during the summer, it could provide too much light, harming the eye. Reindeer have developed a trick to deal with this issue: Their tapetum lucidum actually changes color to adapt to the differing brightness. In the summer, the tapetum lucidum is a golden yellow color, which bounces light back out of the eye. In the winter, the pressure in the eye increases, which compresses the fibers of the tapetum lucidum turning it a bright blue color helping keep light in the eye. 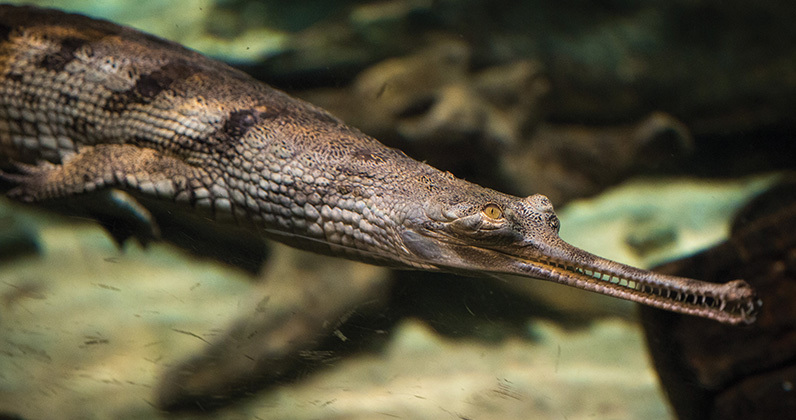 Despite their scaly appearance, gharials, which can be seen in The RainForest, have a very keen sense of touch. They have very unique receptors in their skin called either Dome Pressure Receptors (DPRs) or Integumentary Sensory Organs (ISOs). These receptors are only found in gharials and other members of the crocodilian order. The receptors can sense heat, cold, touch and even certain chemicals. Gharials have ISOs over the entire body!

This type of sensitivity allows the gharials to feel the pressure of waves formed by prey in the water and then pursue the prey, even in darkness.

Researchers suspect that ISOs’ response to heat and cold may help with controlling body temperature since members of the crocodilian order do not produce their own body heat like mammals do. 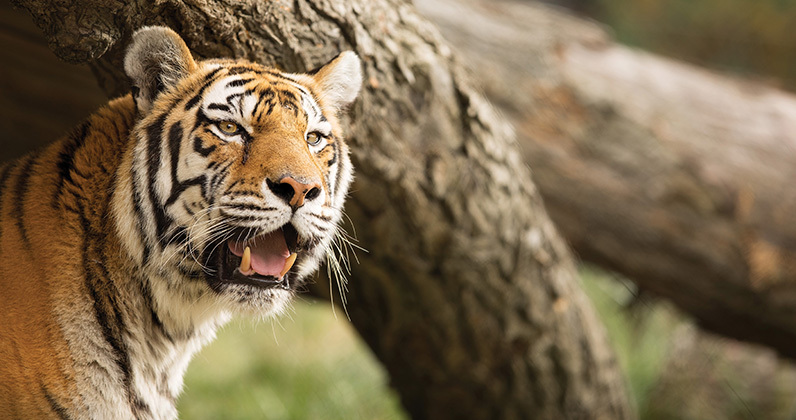 As you walk through Rosebrough Tiger Passage, you may see one of the Amur tigers snacking on meat chunks. Tigers are carnivores, which means they only eat meat, and they have a well-developed taste for bitterness. This helps them detect whether or not carcasses they find in the wild may be spoiled.

Cats also have taste receptors for a molecule known as ATP (adenosine triphosphate). This molecule is found in all living tissue, such as muscles and skin. Since cats only eat meat, scientists theorize that cats have evolved a taste receptor for ATP.

By contrast, Amur tigers, and all cats in fact, are missing part of one of the genes that encode for the sweet protein receptor and therefore cannot taste sweetness.

As Zoo guests, it’s easy to observe the beauty and strength of the animals, but learning about how they use senses to experience their world brings a deeper understanding of their ability to thrive in the wild. 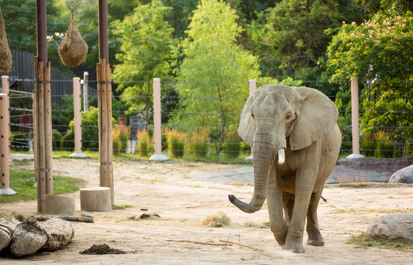 In the wild, elephants spend up to 60% of their day foraging for food. To mimic those behaviors at...