A renewed focus on the illegal wildlife trade 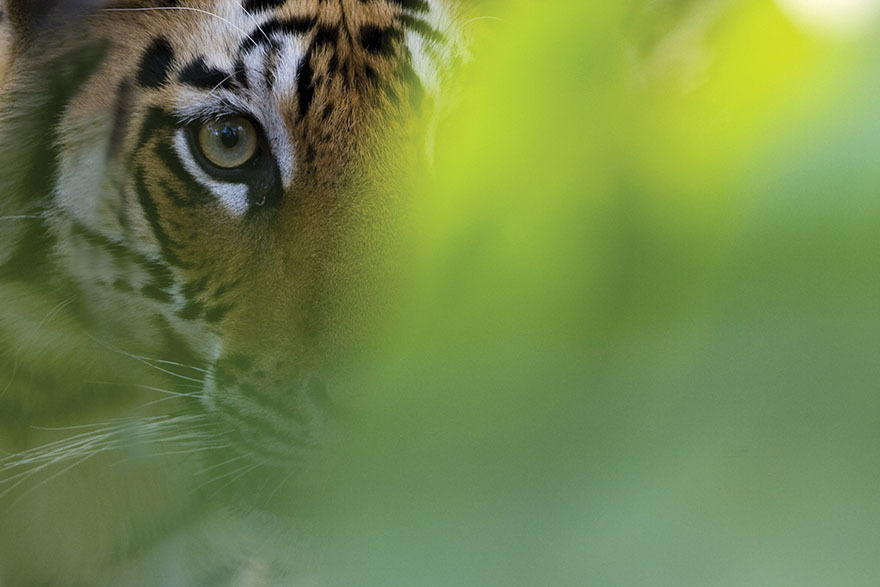 The illegal trade of wildlife and wildlife products is second only to habitat loss as a primary threat to the survival of the earths’ wildlife and is the greatest threat to some of our most beloved species. Animals you love to see on your trip to the Zoo – elephants, rhinos, tigers, turtles - are in grave danger in the wild from this escalating trade, a black market turned “big business”, that is consuming wildlife at unsustainable rates. Worth an estimated $20 billion a year and controlled by dangerous international networks, the illegal wildlife trade has been directly linked to organized crime, terrorism and the trafficking of drugs, arms and even human beings.

This year with the news of COVID-19 originating in a wildlife market in Wuhan, China, there has been increased awareness of global wildlife trade. It is now clearer than ever that illegal wildlife trade can not only contribute to driving species to extinction but can also increase the risk of the next emerging infectious disease.

The human demand for wildlife and wildlife products is causing animals to be trapped for exotic pets or photo props, to be consumed as a delicacy or medicinal remedy, or even to be killed for items used as artifacts or status symbols such as ivory sculptures or fur rugs. Literally thousands of species are threatened by illegal wildlife trade, and it operates at every scale from complex, global criminal networks and smuggling rings, to local food markets, and a rapidly growing market through the internet and social media. 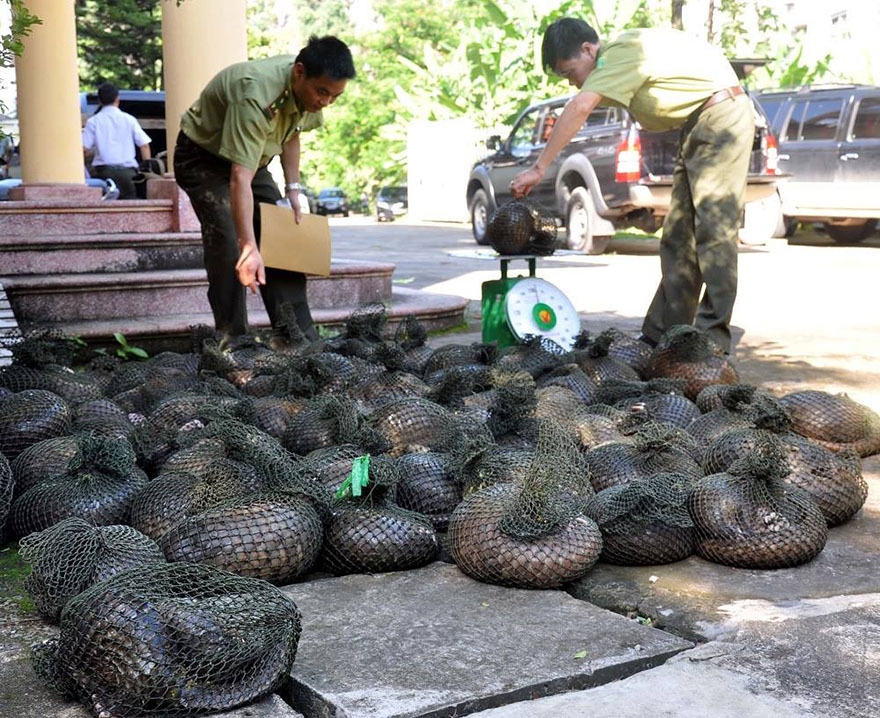 Fortunately, awareness of wildlife trafficking and efforts to combat it have been on the increase in the past few years, particularly with all of the attention given to the illegal ivory, rhino horn and pangolin trades and now COVID-19. There are many organizations and initiatives working at local, national, and international levels to fight illegal wildlife trade, and to effectively tackle it, we need all of the help we can get.

Cleveland Metroparks Zoo’s Future for Wildlife program has been working to combat wildlife trafficking for more than 10 years. We support strategic efforts at all points in the illegal wildlife trade chain, from the collector to the consumer. This involves anti-poaching efforts, law enforcement and regulatory agency support, legislation and political action, large-scale awareness building and education, and public advocacy and behavior change.

Our key conservation partner in this effort is Education for Nature Vietnam (ENV). ENV is working to stop illegal wildlife trade and wildlife crime in Vietnam where species such as turtles and pangolins are at risk and where local food markets may have illegally traded animals for purchase. They work with governments to change and implement legislation and help law enforcement agencies gather intelligence, investigate illegal wildlife trade cases, and respond to wildlife crimes. ENV’s outreach and awareness campaigns educate people in urban centers and actively engage the general public in reducing demand for wildlife products.

ENV’s National Wildlife Protection Network includes thousands of volunteers in 32 provinces across Vietnam. These volunteers monitor and survey consumer wildlife trade hotspots and conduct valuable investigations that have led to documentation and resolution of thousands of wildlife crime cases. ENV also manages a National Wildlife Crime Hotline. Anyone who witnesses or suspects a wildlife crime can use the hotline to report it immediately to ENV, who passes tips along to the authorities with key information that leads to arrests. 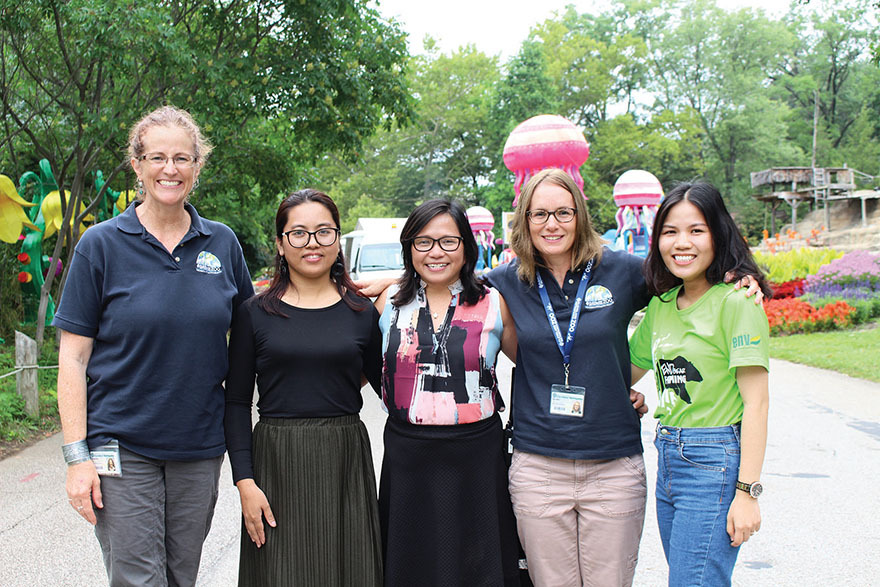 ENV most recently drafted legislation to stop illegal trading and consumption of wildlife throughout Vietnam. This directive as well as an accompanying public education campaign, was initiated in response to the COVID-19 pandemic. Public advertisements and social media campaigns were launched throughout Asia telling people that illegal wildlife trade can lead to global health pandemics.

In addition to the Zoo’s long-time partnership with ENV, your Zoo is also a key supporting partner of the Wildlife Trafficking Alliance (WTA) here in the U.S. As part of a coalition of more than 70 leading companies, non-profit organizations, and AZA-accredited zoos and aquariums, Cleveland Metroparks Zoo is working to reduce the purchase and sale of illegal wildlife and wildlife products. WTA works to raise consumer awareness about the illegal wildlife trade through targeted messaging and campaigns. The Alliance also mobilizes corporations in key industries such as travel and luxury goods to help cut off traffickers’ access to consumer markets and use their communications channels to assist in raising public awareness, changing consumer behavior, and reducing demand. 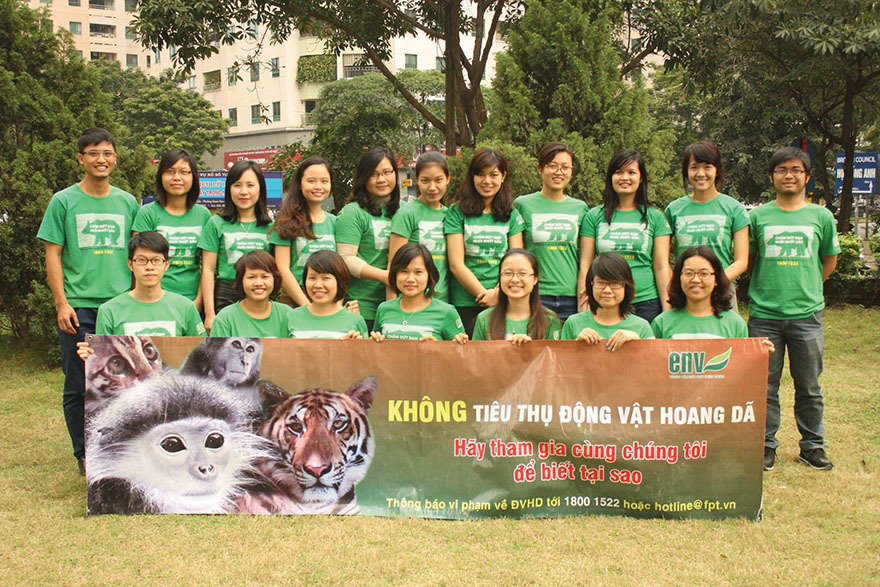 It is promising to see both a renewed and growing global commitment to combat wildlife trafficking. As the world battles a global health crisis, it is now more evident than ever that addressing the illegal and unsustainable wildlife trade is important not only to protect species, but global human health as well.

Moving forward we must strengthen our efforts to combat wildlife trafficking, work to reduce consumer demand for illegal wildlife and wildlife products, and focus our efforts on wildlife markets that contribute to illegal and unsustainable wildlife trade. At the same time, we must support legal, responsible, and sustainable trade that contributes to the livelihoods of some of the world’s most vulnerable people, many of whom depend on wild resources for survival.

It is a delicate balance but one that we must strike if we are to support equitable and sustainable solutions that protect biodiversity as well as human and planetary health. Working together as a global community, and with your help, we can do just that.