Are you missing sports in the time of social distancing? The thrill of competition? Two teams pushing themselves to see who can perform better? Well, if the new online marble racing circuit isn’t filling that void for you, Cleveland Metroparks Zoo may have an option for you!

In fact, Cleveland Metroparks Zoo partners with a wildlife conservation project that routinely hands out more than sixty-five times more points than an average basketball game. If this sounds interesting to you, then read on about the incredible work (and astronomical point totals) of the communities working with the Ruaha Carnivore Project. 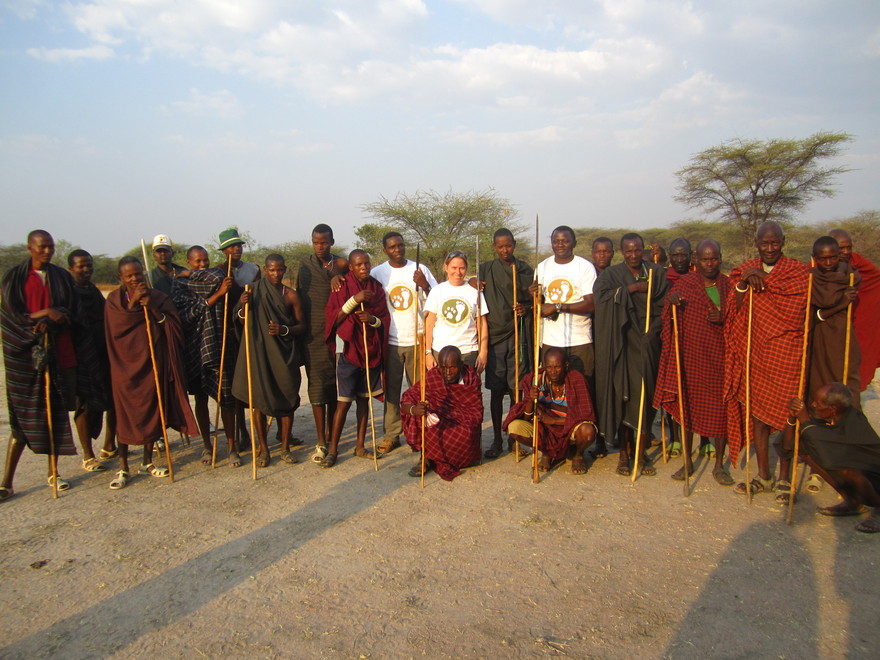 Based in Tanzania, the Ruaha Carnivore Project is working to secure a future for large African carnivores including lions, cheetahs, hyenas, leopards and endangered painted dogs. The mission of the Ruaha Carnivore Project is “to achieve successful human-carnivore coexistence by empowering local communities, and to develop effective strategies for long-term carnivore conservation”. The project, started in 2009 in a small pile of tents under a tree on the outskirts of Ruaha National Park, is led by Dr. Amy Dickman. Dr. Dickman and her team work with and empower local pastoralist communities to simultaneously protect their own livelihoods and at the same time help protect populations of endangered carnivores. The Ruaha Carnivore Project’s impact is widespread in the greater Ruaha area, engaging in activities ranging from building fortified livestock enclosures in local villages, placing Anatolian Shepherd livestock guarding dogs with local herders, and training local people in best-practice livestock protection methods. The combination of these different approaches has led to incredible results in the local community, and carnivore attacks on livestock have been reduced by over 70% in target areas. However, the Ruaha Carnivore Project (RCP) does not solely focus on work with local communities, but also engages in “boots on the ground” science and ecological research to better understand the ranging habits of lions, hyenas, and other large carnivores in the Ruaha landscape. Two of the most important tools utilized by the RCP in their scientific research are satellite collars and camera traps. 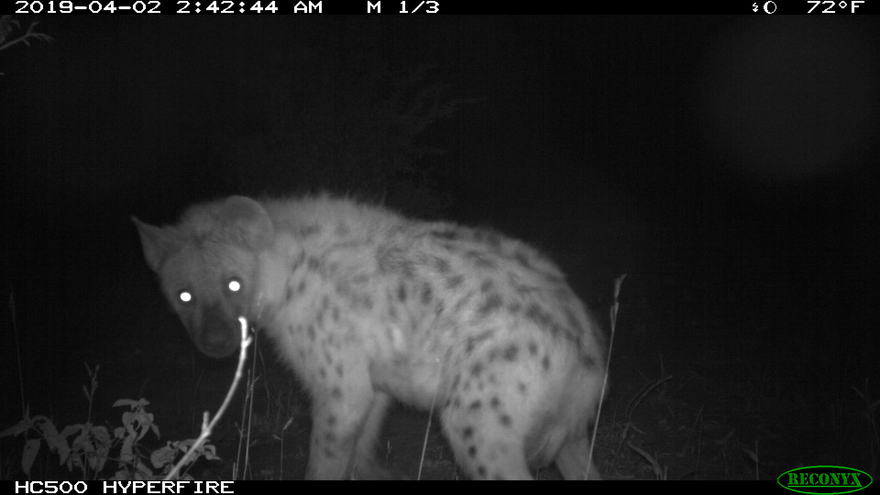 Camera trap image of a hyena

Camera trapping is a widely used technique among conservation biologists, and camera traps utilize a sensor that, when triggered by movement, rapidly captures an images of whatever animal, human, passing vehicle, or other moving object passed in front of the camera trap. Camera traps are particularly important to the RCP because the landscape is so immense, and carnivores tend to be very difficult to track and monitor through conventional observational methods. Carnivore species tend to be elusive, have wide ranging patterns, and live a crepuscular (active at dawn and dusk) activity pattern. All of these factors combined make following lions or hyenas through the African bush a particularly difficult feat. The RCP has effectively deployed a small army of camera traps in target areas to monitor and track wildlife. Data in the form of camera trap images allows the researchers to collect information on the distribution and ranging behaviors of both predator and prey species in the Ruaha landscape. These data are important because understanding species distribution can help RCP predict areas of potential predator-livestock interaction and work with local communities to implement preventative measures. Additionally, data collected from these camera traps has been a boon to the greater scientific community, as these data have led to the first publications on wildlife ecology in Ruaha National Park. 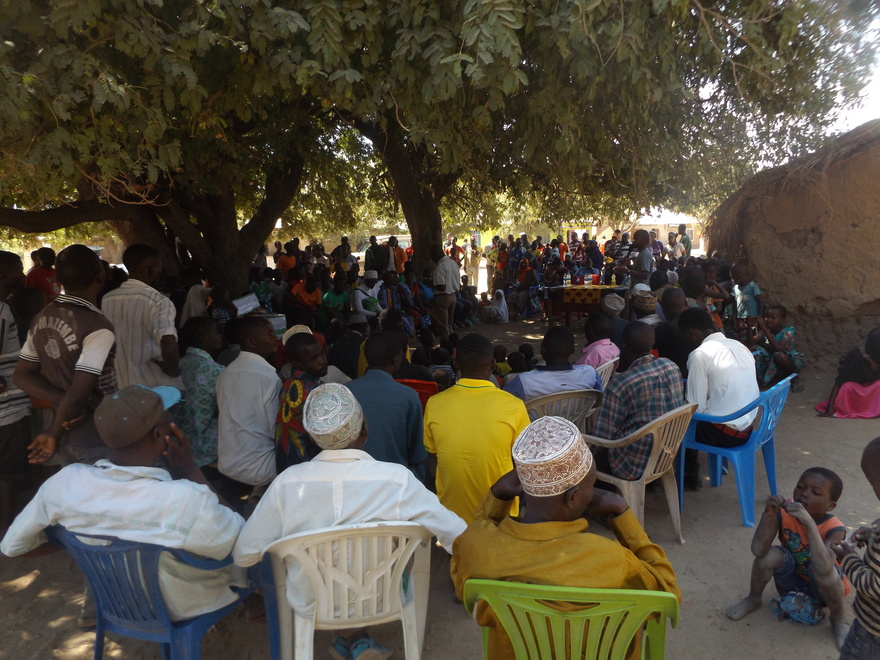 At this point in the post, you may be thinking to yourself, “Hey Charles, I’m now super intrigued by African carnivore conservation, but you promised me high scoring sports, where are my sports”? Do not worry, I promise there will be more than points to make up for your patient wait. In the spirit of community collaboration, the RCP also encourages local villagers to actively participate in the collection of camera trap data. In order to generate a little excitement around data collection (I know what you are thinking, how could the collection of scientific data points get any more exciting?), the RCP has implemented a community camera trap program that includes a “points system” for camera trap images captured on village land. Different local communities are responsible for different camera traps, and, depending on what animals are found in the images on their camera traps, communities receive different points. For example, a more common hoof stock species like a lesser kudu, is worth 1,000 points, whereas a more elusive carnivore species like a spotted hyena, is worth 10,000 points. A particularly rare species, like a leopard, is worth upwards of 15,000 points, and certainly makes a 35 foot three point shot seem minute in comparison. Camera trap data collection is divided into separate periods (think “playoffs”), and, at the end of each data collection period (about three months), the community who has scored the most points is crowned the “champion”. RCP distributes additional healthcare, veterinary and educational benefits to villages participating in the community camera trap program, with the villages who record the most wildlife (points) getting the most benefits. On top of that, the communities gather to celebrate their efforts and the communities with the most point earned are recognized for their achievement. While it may seem relatively simple, assigning these astronomical point values to each species has led local communities to place additional value on the presence of endangered wildlife, and actively work to help protect them. 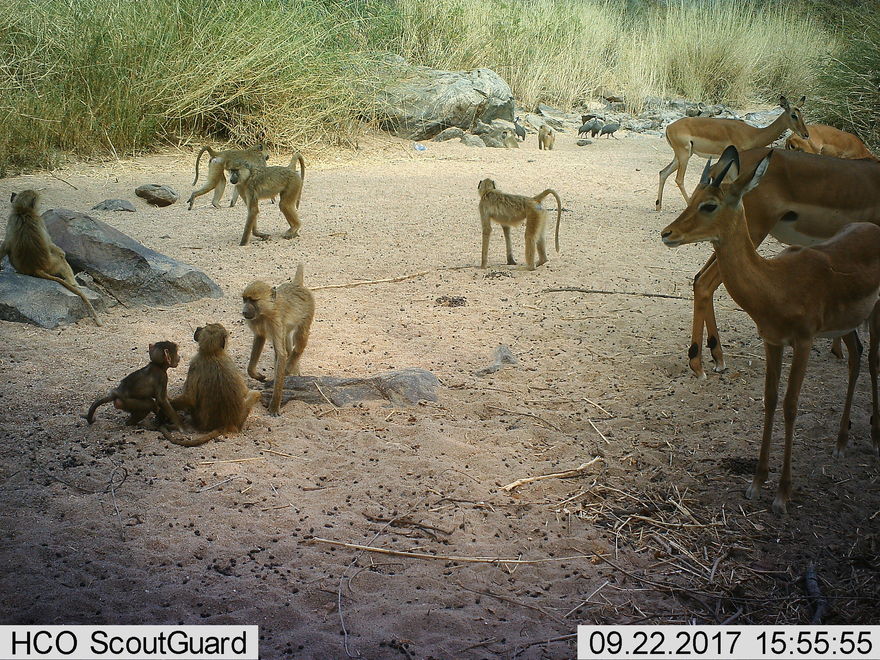 Check out the points on this community camera trap image!

While the camera trapping, as well as other RCP programs have been resounding successes, Ruaha’s researchers and conservation biologists have had to work hard recently to overcome some unanticipated obstacles. Due to challenges related to COVID-19 RCP has modified their social interaction protocols to ensure staff and community safety while continuing to collect important data and support local communities. The Ruaha region has also experienced flash floods due to a historic rainy season, causing some of the camera traps in the park to be washed away. Luckily, all of the cameras and their corresponding data were recovered! Even with these obstacles, the RCP has recently placed a satellite collar on a spotted hyena for the first time ever. This collar will provide valuable data on the distribution of this species, which is responsible for 80% of the livestock attacks in the area. Hopefully at this point, you are feeling inspired to help the RCP continue this important work, or you’d like to try to score 15,000 points yourself. Check out the Zoo website to learn more about our Future for Wildlife Lion and Cheetah program and the Rutha Carnivore Project (https://www.clevelandmetroparks.com/zoo/lionandcheetah), and visit Snapshot Ruaha on Zooniverse (https://www.zooniverse.org/projects/meredithspalmer/snapshot-ruaha/about/research) to try your hand at scoring points from camera trap images yourself!