The joy of a joey

Through quality animal care and welfare and science, a koala is born. 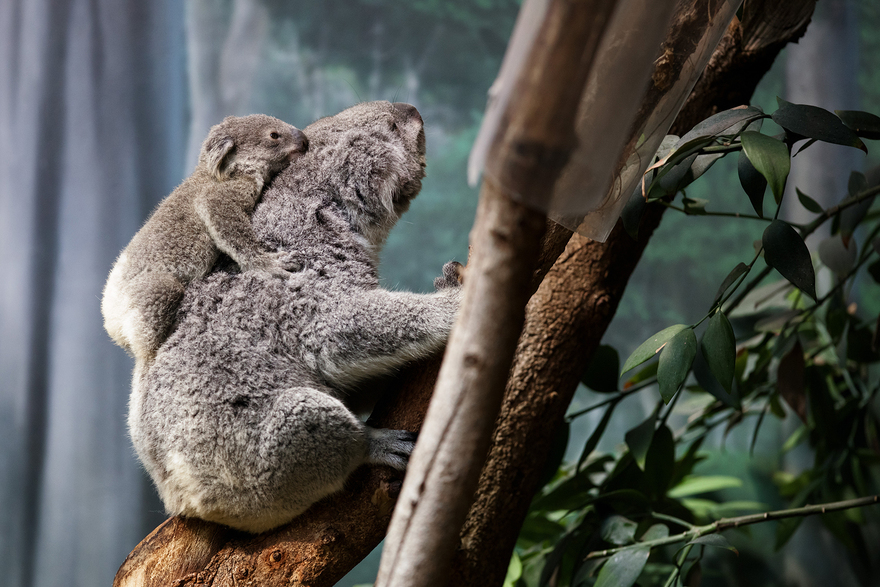 Have you met Maya? The youngest resident of your Zoo’s Australian Adventure just turned one and has been clinging to her mother, Mackenzie, and delighting visitors ever since. Her arrival is all the sweeter as she is the first successful koala birth at Cleveland Metroparks Zoo since 2011. It is wonderful to have a pair of tiny tufted ears in the koala exhibit, and there is a lot to know about how it came to be.

Maya is more than just a heartwarming addition to the Zoo. She represents a concerted effort to promote a vibrant, genetically diverse population of koalas in Association of Zoos and Aquariums (AZA) accredited zoos. Her birth, as with zoo babies of all species, is the collective efforts of dozens of scientists and animal care professionals working to achieve a successful pregnancy and healthy offspring. From strategic decision making to careful breeding, prenatal monitoring and attentive care, young Maya’s story is one of science, teamwork, and proud accomplishment. 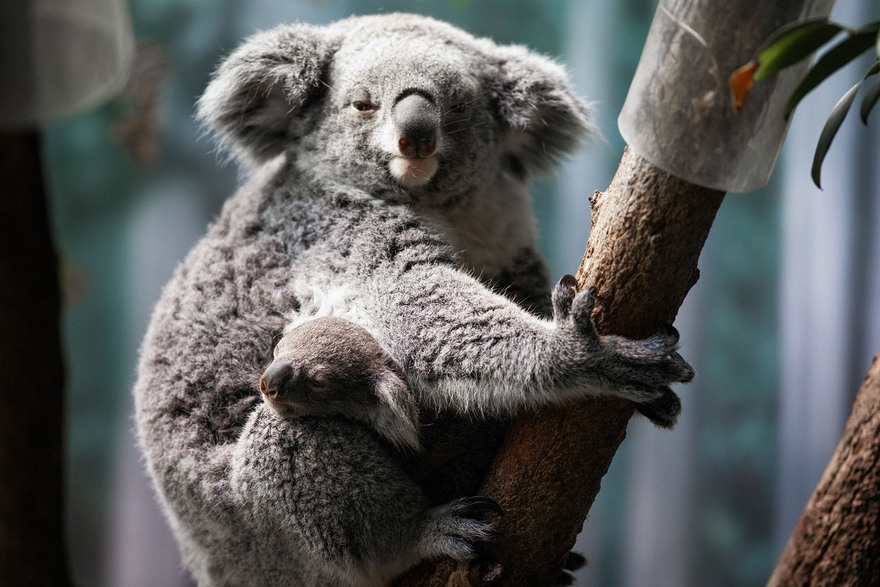 Koalas and all other marsupials give birth to underdeveloped offspring, which then spend a period of time in the mother’s pouch to reach full development. Koala joeys are born after a gestation period of 35 days and then migrate to the pouch, where they spend most of their time for the next six months. Newborn joeys are tiny, weighing less than a gram – about the size of a lima bean – and resembling a naked pink rodent more than the fuzzy-eared koalas we recognize. While in the pouch, the joey is completely dependent on its mother’s milk to live.

As the joey begins eating leaves around 33 weeks of age, it becomes less and less dependent on the calories that its mother’s milk provides. Eventually, it weans itself and ventures from the pouch to spend most of its time clinging to its mother’s back. This continues until the joey reaches around one year of age and begins to explore more, ultimately leaving its mother to seek a new home range. 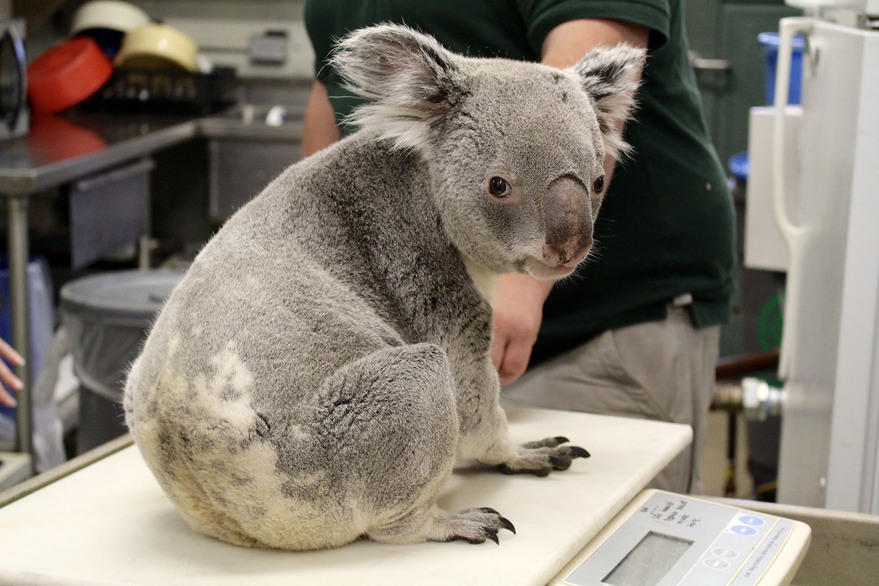 In the wild, the leaving of their mothers is a natural next step of the koala’s growth, and a necessary one. Young koalas leave their mother as competition for food and competition among males increase. In a zoo setting, young koalas tend to stay with their mother a little longer as the struggle for food is less of a factor and group dynamics are managed by the animal care team.

Female koalas begin mating at two years of age and can typically produce one offspring each year for the next 10 to 15 years. In the wild, the dominant male overpowers rivals to win the right to breed, but the zoo breeding process looks a little different. To understand this better, it is important to learn a bit about AZA’s Species Survival Plan® (SSP) Program.

Cooperatively managed by experts across member organizations, AZA states that its SSP Programs work to “maximize genetic diversity and appropriately manage the demographic distribution and long-term sustainability of TAG (Taxon Advisory Group) recommended Animal Programs within AZA member institutions.” If this sounds complex, it is. To ensure “genetically diverse and demographically stable” populations, zoo scientists and animal care professionals must not only consider the animals in their care, but the population of zoos around the country.
Dedicated zoological experts maintain detailed records on the genetic information of each individual of a species in participating zoos. These records comprise the species’ “studbook,” which helps guide decisions on breeding and transferring of individual animals between zoos. Genetically valuable individuals – those whose genetics lend diversity to the pool – may be transferred to other zoos for breeding purposes, helping maintain a healthy and self-sustaining population.

The koala SSP, which has worked seamlessly with your Zoo since the first koalas arrived in Cleveland in 1999, recommended breeding between Mackenzie and Nyoombi based on a plan for reproduction of koalas in zoos across the country. In fact, Mackenzie wasn’t even in Cleveland when the match was made! 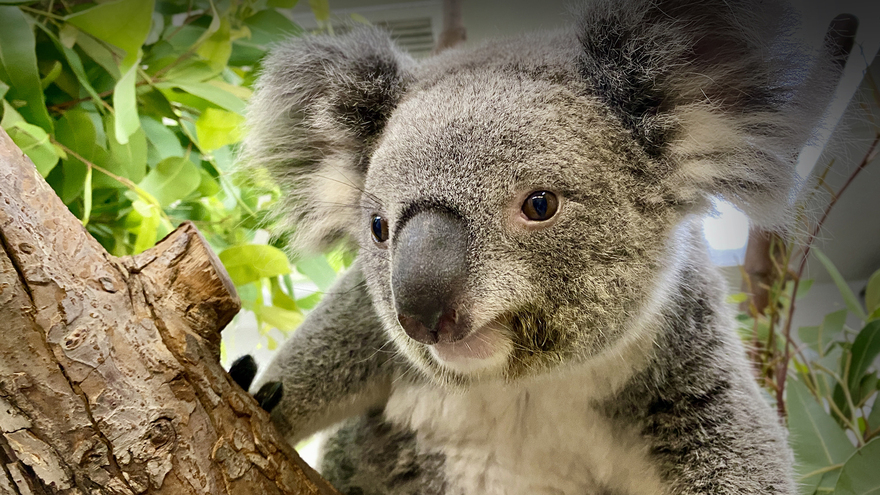 Mackenzie and Nyoombi: It’s a Match

Five-year-old Mackenzie was brought to Cleveland from the Los Angeles Zoo, and the animal care team soon carefully introduced the pair, then oversaw the breeding process. Mackenzie and nine-year-old Nyoombi are both first-time parents, so the team ensured that breeding occurred successfully and Nyoombi did not exhibit any signs of aggression that could have harmed Mackenzie. From there, prenatal care was largely hands-off; Mackenzie was monitored primarily by behavioral observation and weight gain. Pregnancy in koalas is easier to detect than in other species, so no extra steps had to be taken for the animal care team to keep an eye on the pregnancy.

The animal care team predicted a window of when a joey could be born based on the date of a breeding event between Mackenzie and Nyoombi. During those few days, the keepers worked to reduce stressors to Mackenzie even more than usual. Minimal intervention from humans is ideal during breeding and rearing, so the team was happy to allow nature to lead the way.
Animal keepers first confirmed movement in the pouch in May, followed by visible pouch enlargement in July. Around this time, Maya started sticking her head and limbs out of the pouch for her first glimpses of the world. After months of patiently giving mother and baby their space, the sight of a fuzzy joey was a true joy.

Healthy koala joeys require no special care from the animal keepers, who monitor their behavior and weight as indicators of normal development and allow them to grow and develop without much interference. Weight gain is extra important as the joey transitions to eating eucalyptus, so a more detailed eye was dedicated to monitoring Maya during that time to ensure that she was getting enough nutrients. Maya has proven to be a strong and healthy joey, and your Zoo’s animal care team is happily watching her grow.

Maya’s story has unfolded without much trouble, but just a couple years ago the Zoo experienced an unfortunate loss of another joey. Breeding in zoos is always uncertain, and animal care teams work closely together to provide the best environment for each species. Maya’s successful birth represents a triumph after 2018’s loss, and a multigenerational accomplishment as well – Nyoombi was among the last cohort of successful koala births in Cleveland.

Nine years may seem like a long time to go without a koala joey, but Cleveland Metroparks Zoo has an honorable track record with koalas and takes great pride in the collaborative planning and care that resulted in a healthy new addition to our koala population. The animal care and science teams have proven to be leaders in the SSP program for koalas as well as other managed species. This investment in ensuring vital animal populations in zoos is reflected by your Zoo’s commitment to protecting species in the wild. Though koalas are not a species of focus for the Future for Wildlife program, Cleveland has contributed over $185,000 to koala conservation via the SSP’s conservation partners since 1999.

At first glance, Maya is just a healthy, growing koala joey, but her birth story reveals important details about how AZA accredited zoos operate. Her journey, in all its scientific complexity, is a successful example of how SSPs bring zoo professionals together to maintain thriving animal populations. These goals are achieved through everything from daily tasks to big picture strategic decisions: the attentive care and monitoring by animal keepers, the thoughtful research and problem solving of curators and zoo scientists, and the population management programs led by Zoo leaders across institutions.

Whether Maya stays in Cleveland or travels to another zoo after she becomes independent from Mackenzie is yet to be determined. The SSP could recommend transferring her for breeding when she reaches maturity around two years, or another male may be brought to Cleveland. In the meantime, she will stay with Mackenzie in the Australian Adventure, where we can all enjoy watching her explore her world.