A trio of tiger cubs has taken over Rosebrough Tiger Passage and has captured the attention of the Zoo’s many visitors this summer. These tigers - boy Luka, and girls Anya and Indrah - are the first cubs at the Zoo in more than 20 years, and because of that they are a big deal for our keepers and our guests. 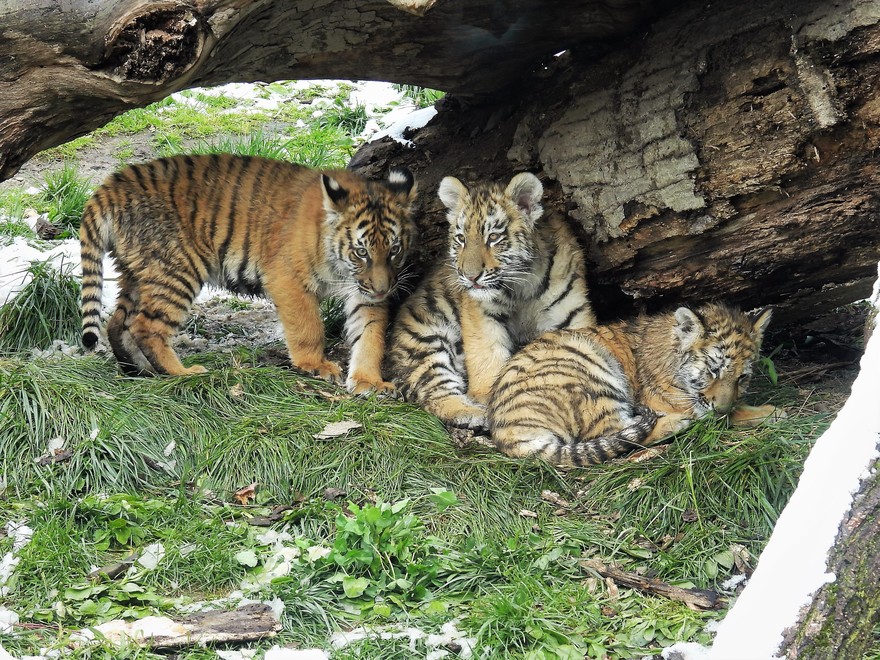 “I could not be more proud of how my team handled this whole animal care situation, from early in December when the cubs were just born to now seeing them enjoy the outdoor yards at Rosebrough Tiger Passage,” said Jen DeGroot, Associate Animal Curator at the Zoo.

DeGroot was part of a core team of animal care and veterinary staff that took care of the cubs from their earliest days. Luka and Anya were born in Cleveland in December 2020 to first time parents, mom Zoya and dad Hector, the two adult tigers at Rosebrough Tiger Passage.

While tigers are solitary animals, mother tigers typically raise their young for their first two years. That did not happen with Zoya. After thorough observation, Zoya displayed minimal signs of maternal care, requiring the cubs to be raised separately by the Zoo’s veterinary and animal care experts. It’s not uncommon for first-time mother tigers to become overwhelmed with this new experience, said Travis Vineyard, Animal Curator at the Zoo.

“Hand rearing is never the first choice for our teams. But after very careful, around-the-clock observation we knew that pulling the cubs for human care would give them the best shot at a healthy beginning,” he said.

The Zoo’s team bottle-fed the cubs five times a day and kept careful watch on their milestones, their diet and overall health. Just a few weeks after their birth, Zoya’s two cubs were introduced to Indrah, a Malayan tiger cub who came from the Tulsa Zoo because she, too, was being hand reared. 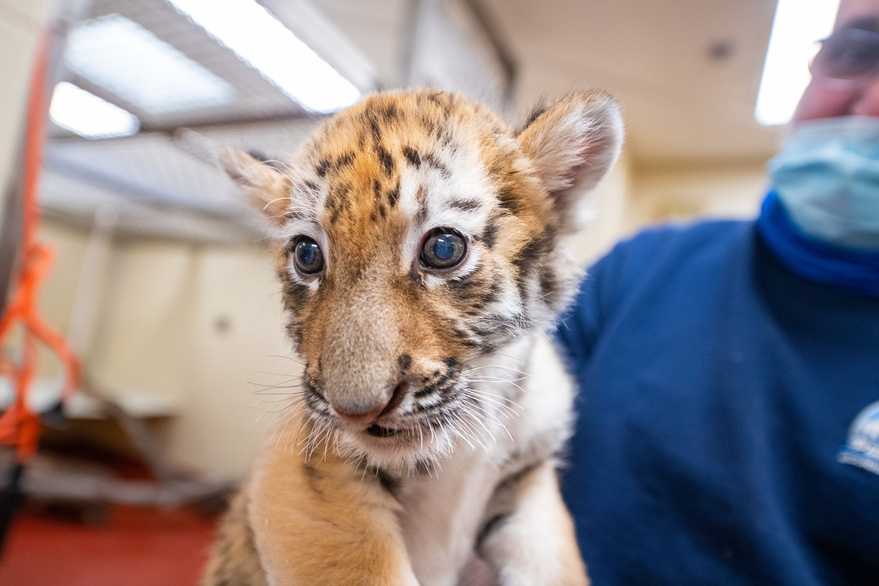 The cubs have grown quite a bit since their time in the Sarah Allison Steffee Center for Zoological Medicine.
Photo courtesy of Kyle Lanzer, Cleveland Metroparks

The move was spearheaded through conversations between Cleveland Metroparks Zoo and Tulsa Zoo, and was coordinated through the Tiger Species Survival Plan (SSP) Program. The Tiger SSP administrates the highest standards of care and welfare for tigers by working collaboratively across the over 230 accredited zoos of the Association of Zoos and Aquariums (AZA). Additionally, SSP programs represent their species regionally and internationally through husbandry, conservation efforts and scientific opportunities.

Like Luka and Anya, Indrah’s mom in Tulsa did not demonstrate maternal bonding or work to support Indrah. While they differ as a subspecies, raising the Malayan cub with the two Amur cubs allows for essential behavioral and social welfare.

“The main goal is always to foster naturalistic behaviors in our animals,” said Vineyard.
“By raising the cubs together, all three of them will learn how to be big cats together and not be overly influenced by the human interaction they had at the beginning of their lives. We are so excited to watch them grow and learn.” 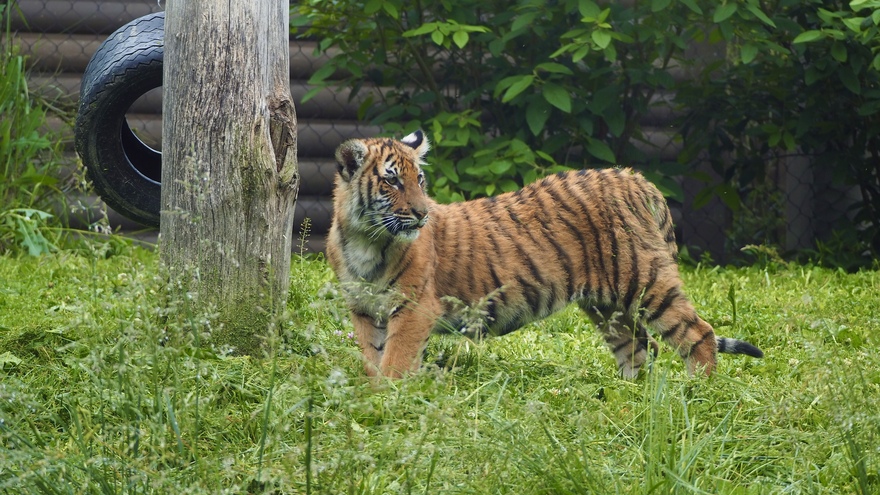 And now that summer months are here, the cubs are doing plenty of growing and exploring together.

Here are a few updates:

How big are the cubs now?
At the end of May, the cubs were averaging about 60 pounds. When Luka and Anya were born in December they weighed in at one pound, so that’s quite an increase! Their keepers report they are gaining about five pounds a week. Their diet has shifted to all meat, and they are fed about three pounds of meat a day. Even though they spend their days and evenings as a trio, the cubs are fed separately to discourage competition or fighting for food.

Tigers and big cats grow fast, and by the end of the year these cubs will look more like parents Hector and Zoya than little ones. By contrast, primate babies grow at about the rate of human babies. So the orangutan baby born to Kera Wak just a few months ago promises to look little for quite some time, just like his older sister Merah still looks like a kid at 6 years old.

Rosebrough Tiger Passage, which opened in 2016, was designed with cubs in mind. The habitat has multiple outdoor yards that can be separated to allow different tigers outside without being together. The yards have different features, some easier for the cubs to get used to and some features, like water and overhead paths, that have taken some getting used to. There is also a “den” out of guest view where the cubs first started. This space allowed them to get used to being in a new building and allowed Hector and Zoya to see and smell the cubs without having any contact with them, but also gave them privacy from the Zoo’s many guests.

The cubs were introduced to the outside exhibit in mid-April and immediately took to exploring their outside space. The first two months they experienced different weather - from hot temperatures to snow in May. Keepers put out a variety of enrichment activities for them including logs to climb, small buckets for them to tumble and more.

Most recently, the keepers have been introducing the cubs to the front yard that has a small pool of water. The water level has been lowered significantly, and keepers added some large logs that the cubs could use to climb out of the water easier than making a big step up like the adults can.

Indrah has been the most brave so far; she was the first cub to hop into the water and also to climb onto the ramps leading to the overhead tunnels. Luka typically follows, then Anya is the most timid.

Getting them used to different yards is also enrichment in itself, as the yards have different sounds, smells and sights.

When can guests see them?
The cubs are now granted access to the outdoor yards from 9:30 A.M. to 4:00 P.M. most days. The keepers say they tend to be outside and most active in the morning, so make Rosebrough Tiger Passage your first stop on your next Zoo visit. 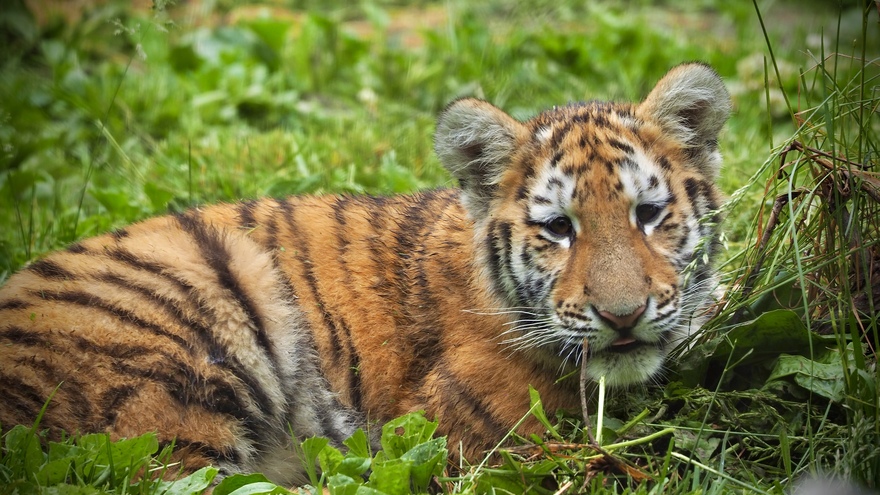 Anya settles down for a rest in between morning play.

“Like many of our animals, the tigers are given access to their outdoor and indoor habitats throughout the day so they can choose different locations,” said Vineyard. Like most human kids, the tigers tend to have a ton of energy in the morning and rush outside to explore. By mid-day or when it’s very warm, they have been venturing back inside for a nap in the shade.

Will the cubs stay in Cleveland?
Unfortunately, no, these cubs will not have a permanent home in Cleveland.

The breeding and rearing of tigers is managed by the SSP, which also decides where animals get placed in other accredited zoos. Tigers, like snow leopards, are solitary animals, so after 18 to 24 months of being in Cleveland together, the cubs will be placed in other zoos around the world. Luka and Anya in particular will need to move on to breed with other tigers. 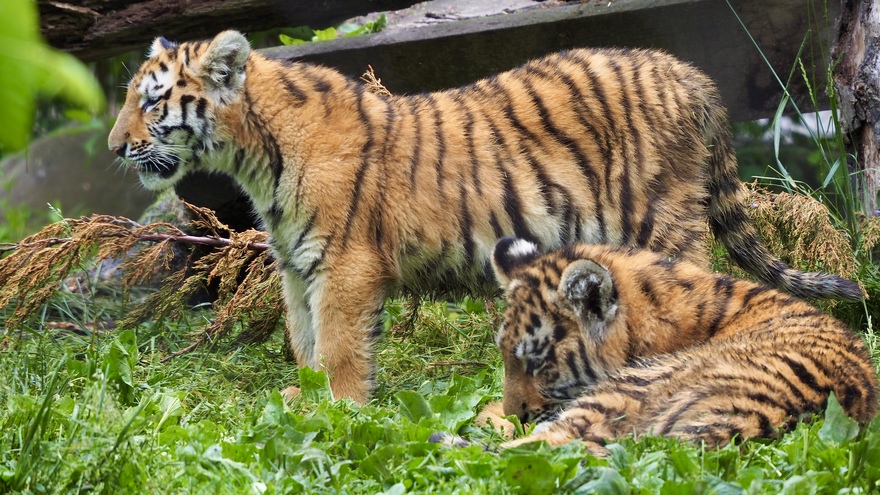 “Internationally, Luka and Anya are extremely genetically valuable,” said Vineyard. “Because they were born to first time parents, it is important that they go on to breed cubs of their own to help sustain a healthy and genetically viable population of tigers in captivity. Zoos have a very important role to sustain the population of endangered animals like tigers, and healthy breeding and rearing is the first step in making sure we get many more tigers throughout the world.”

While there is no announced SSP plan for Luka, Anya and Indrah yet, we can assume by next summer the cubs will be fully grown and could be moved to other zoos. Parents Hector and Zoya will stay in Cleveland, and will hopefully produce more tiger babies in coming years. 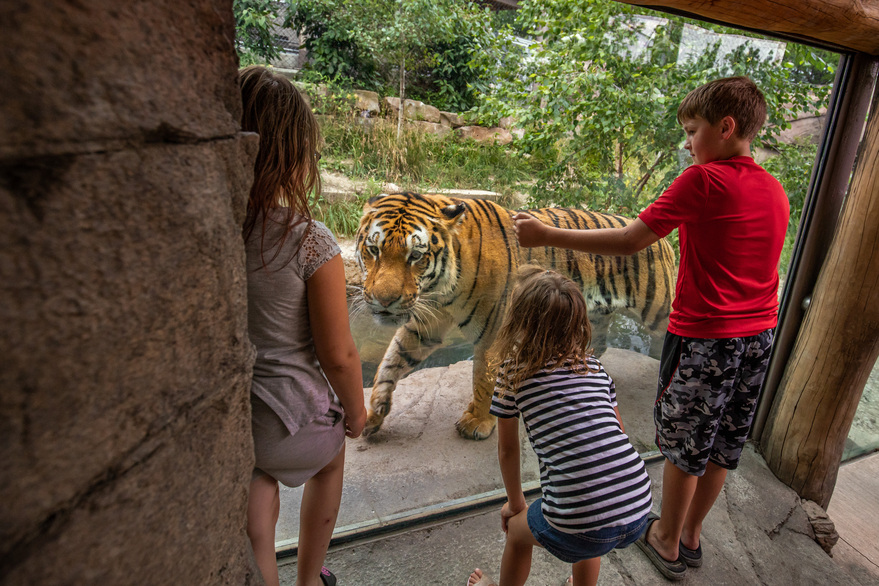 How have Hector and Zoya adapted?
As much as this year has been an adjustment in Rosebrough Tiger Passage for the cubs, Hector and Zoya also have had to learn to adapt since the cubs arrival. As first time parents, it’s possible both cats have never seen or sensed cubs so it is unfamiliar to them. Hector in particular was a little nervous at first, said Vineyard, and tended to stay outside when the cubs were in the internal den. Zoya and Hector are very vocal cats and can often be heard calling to each other or growling or chuffing at the cubs in the other yards. When the cubs first came outside, Zoya often sat atop a large rock in the front yard, so she could stare at the cubs in the yard nearby.

The cubs will never be put with Hector, of course, and likely will not reunite with Zoya. Even Anya will likely remain separate from mom Zoya unless the animal care team decides it’s best she return with mom when she gets a bit bigger.

It’s been so exciting to see these new additions to Rosebrough Tiger Passage, and each week is bringing new changes to their actions and personalities. The animal care team continues to monitor the cubs and provide new enrichment for all five tigers so the individuals have best in class welfare and health care.

“These being the first cubs in Cleveland in 20 years, it’s been a whole new experience for most of the team and certainly the guests,” said Vineyard. “We look forward to watching the cubs grow and interact even more through the year.” 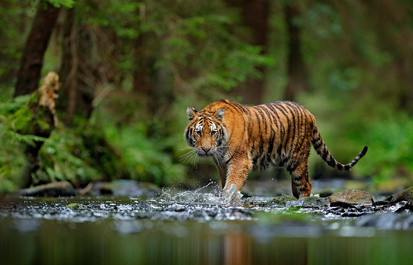 Helping tigers in the wild

Visiting the tiger cubs at Rosebrough Tiger Passage should be a highlight of your summer visit to th...