Wildlife care and health has influenced my life in many ways. As a veterinarian, I have seen how people’s fascination with wildlife often is linked inextricably with people wanting to own wildlife. “It’s so beautiful!” or “it’s so adorable!” is so often followed by “I want one!” or “Can I keep it?”. I have often been in a position to do the important job of informing people about the risks of keeping wildlife as pets; how the delicate fawn could grow to an adult buck completely unafraid of humans and cause serious harm to you or others; how those cute baby raccoons with their tiny hands and adorable face masks might carry deadly rabies virus, how wildlife and many exotic pets are really not intended to be “pets” at all. I never knew if my words were heeded or fell on deaf ears, but I knew that the message was important to convey. 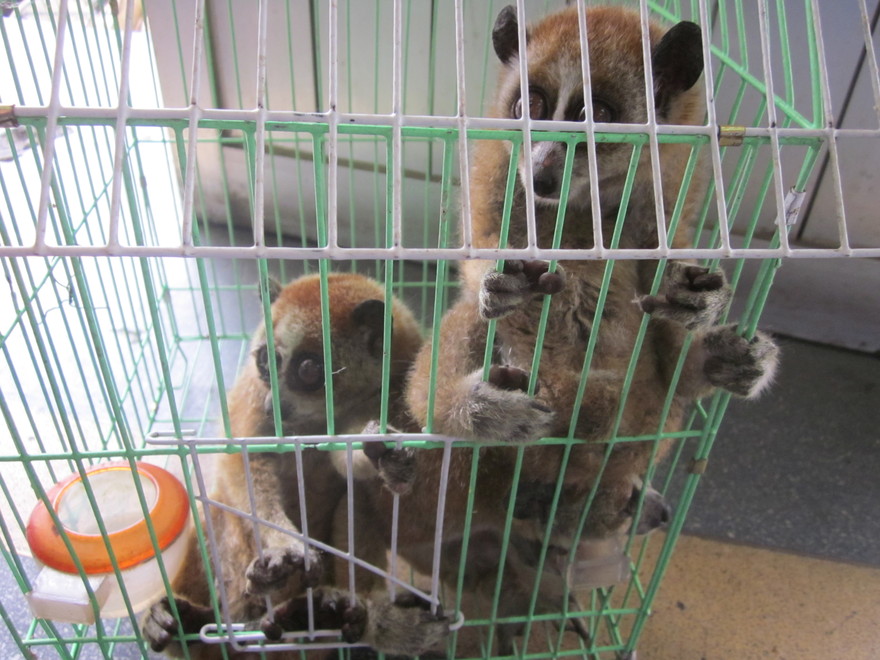 Loris confiscated from a street vendor in Vietnam.

Now much of my time is spent teaching veterinary and graduate students about wildlife and our connections to nature. In veterinary medicine and human health, the most frequent reference to wildlife is the declaration that more than 60% of emerging infectious diseases are zoonotic (transmitted from animals to people) and the majority (more than 70%) originate in wildlife. This statement is typically followed by the point that these emerging infectious disease events are increasing significantly over time. Oftentimes, that ends the discussion of wildlife. As the Zoo’s veterinary epidemiologist and faculty at Ohio State College of Veterinary Medicine, much of my work focuses on continuing that discussion. As a teacher, I encourage students to think beyond those statements to understand how emerging infectious diseases come from wildlife and what we can do to prevent this occurrence. We talk about how the expanding human population with its enormous global demand for meat is driving more people towards wildlife to meet this demand. We discuss how desire for natural resources such as minerals and lumber are bringing people closer to wildlife as we encroach on their habitats to meet our needs. The conversation turns to the demand for land itself, for agriculture and housing, and how we often push wildlife aside to make more room for ourselves. Many species are lost while others learn to live on the edge of these human habitats or even how to survive amongst us. As we get closer to wildlife, the frequent encounters provide increasing opportunities for transmission of diseases. 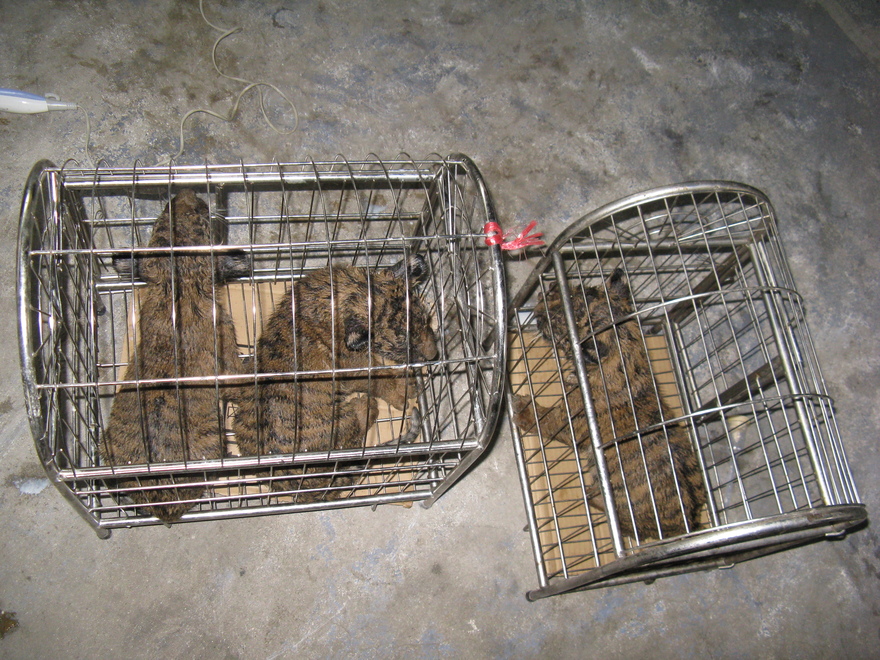 The pressure put on wildlife and habitats from human activities is a growing problem, but there is an additional issue to address when we look again at wildlife and people. The human fascination with and desire for wildlife can sometimes be possessive or related to wildlife consumption, and fueled by a human demand for exotic pets, or wildlife parts for delicacies, traditional remedies, or prestige. This demand for wildlife and wildlife products fuels an often unsustainable and sometimes illegal trade. Illegal wildlife trade, or wildlife trafficking is consuming global wildlife at alarming rates and is a grave threat to the survival of the earths’ species. Habitats around the world including forests, savannahs and oceans are being emptied of wildlife to meet the increasing demand. Literally thousands of species are threatened by this trade - animals like pygmy slow lorises, cheetah cubs, corals and seahorses, pangolins, elephants, and rhinos – all in danger from illegal trade. Human activities related to illegal wildlife trade not only contribute to driving species to extinction, but also increases the risk of the next emerging infectious disease. 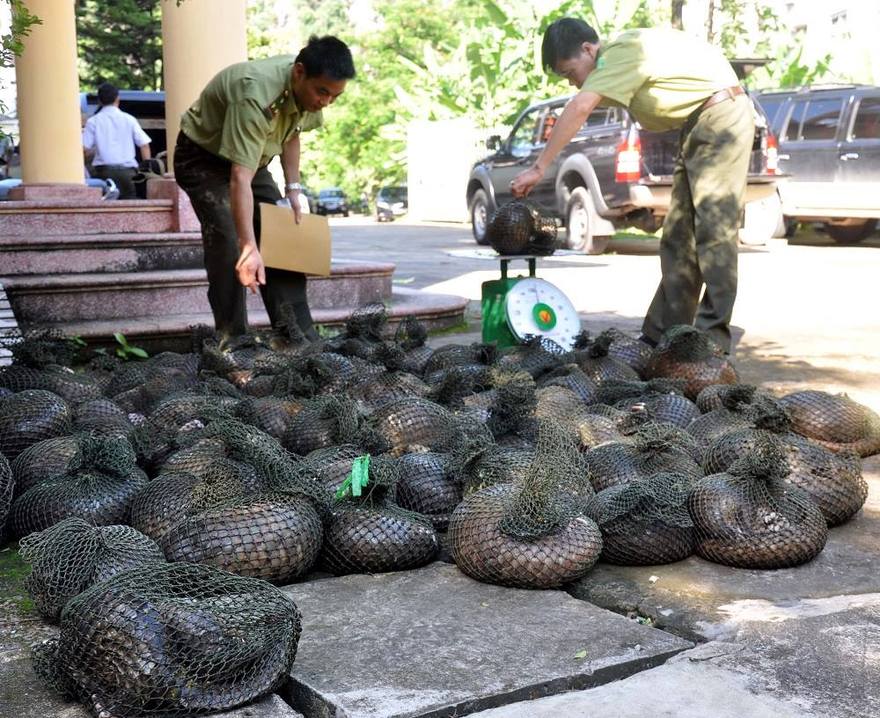 Discussing these issues is important, and it is rewarding to hear students comment “I never realized my role in this”, or “I hadn’t thought about it that way”. Semesters later I have heard students remark that they still remember me talking about how human activities affect wildlife or specifically about pygmy slow lorises and the illegal pet trade. It is even more rewarding to hear comments that they tell their friends not to ‘like’ social media posts about exotic pets, as it can fuel the illegal trade in wildlife and popularize exotic wildlife as pets. Education and discussion are important, but we know that it is not enough. Action is needed. 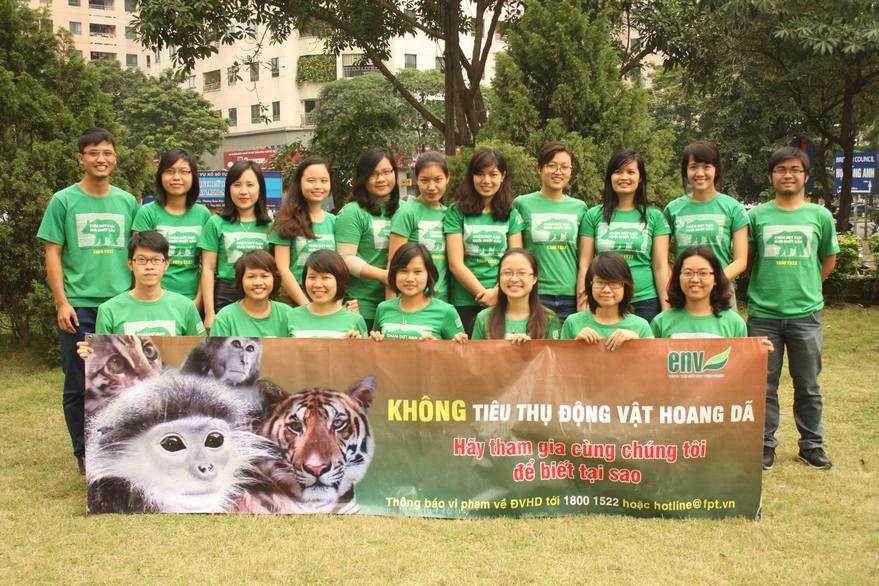 Cleveland Metroparks Zoo’s Future for Wildlife program works to combat illegal wildlife trade around the world. We support strategic efforts at all points in the illegal wildlife trade chain, from collector to consumer. This involves anti-poaching efforts, law enforcement and regulatory agency support, legislation and political action, large-scale awareness building and education, and public advocacy and behavior change. Our key conservation partner in this effort is Education for Nature – Vietnam (ENV). ENV is working to stop illegal wildlife trade and wildlife crime in Vietnam through a strategic and multi-faceted approach. They work with governments to change and implement legislation and help law enforcement agencies gather intelligence, investigate illegal wildlife trade cases, and respond to wildlife crimes. ENV’s outreach and awareness campaigns educate people in areas with prevalent wildlife consumption and actively engage the public in combating wildlife crime and reducing demand for wildlife products. ENV’s National Wildlife Protection Network includes thousands of volunteers in 32 provinces across Vietnam. These volunteers monitor and survey consumer wildlife trade hotspots and conduct valuable investigations that have led to documentation and resolution of thousands of wildlife crime cases. ENV also manages a National Wildlife Crime Hotline. Anyone who witnesses or suspects a wildlife crime can use the hotline to report immediately to ENV who passes tips along to the proper authorities with key information that supports action and leads to arrests. ENV responds to reports of all kinds, from a single hawksbill sea turtle that was confiscated and released after a hotline report, to a report that resulted in the discovery of more than five tons of pangolin scales in two containers at Cai Mep International Port. ENV works closely with governments and other agencies to create legislation to protect wildlife, such as the recently drafted proposal to stop illegal trading and consumption of wildlife throughout Vietnam. This directive as well as an accompanying public education campaign, was initiated in response to the COVID-19 pandemic. ENV also lobbies against Vietnam’s legal commercial wildlife farms, which represent one of the greatest threats to wildlife since many are fronts for trafficking and other illegal activity.

Anyone who witnesses or suspects a wildlife crime can use the hotline to report immediately to ENV who passes tips along to the proper authorities with key information that supports action and leads to arrests.

In March of 2020 alone, ENV confiscated and transferred 33 live wild animals for rehabilitation, removed 48 wildlife trafficking links, and deactivated 7 online wildlife trader accounts. ENV works to protect animals that many of us have never seen, such as the spotted linsang, a nocturnal tree-dwelling carnivore found in the forests of Southeast Asia. While rarely seen, linsangs are caught in snare traps to be sold for consumption. Not just fighting for mammals, ENV speaks for all wildlife, including the black breasted leaf turtle, the smallest turtle in the world. This species is threatened by the international pet trade, with many animals exported from China and Vietnam. This tiny turtle is also harvested for food; so small yet facing so many threats to survival. We can clearly see that these actions to combat wildlife trafficking are vital not only for the individual animals affected but, in many cases, also for the preservation of their species. There are many individuals and organizations across the globe, who like ENV are working to address the illegal, and sometimes unregulated and unsustainable trade in wildlife, and there are actions that we can all take to help. We now know that these actions will not only benefit wildlife and wildlife populations but human populations as well.

The risk of a pandemic emerging from wildlife is real, but it will not come as a direct threat from wildlife. The way to prevent it is to eliminate the incredible pressure we put on wildlife populations and their habitats. It is our responsibility to stop wildlife trafficking, address issues of land conversion and large-scale agriculture, manage sustainable wildlife harvesting and develop viable alternatives when harvesting is unsustainable, and stem biodiversity loss. Whether it is an orphaned baby squirrel that is tempting to keep as a pet or a spotted linsang trapped in a snare, we do care about wildlife. It is not enough to care for the individual, however. We must make and support the complex and sometimes difficult decisions and actions needed to protect wildlife, habitats, and biodiversity, and we must act now to bring about the change needed to secure a future for wildlife. There are steps that all of us can take. To learn more about how you can make a difference visit FutureForWildlife.org/conservation.