From the Field 2019: Mountain Gorilla Trek in Rwanda

The big moment – I was so honored and humbled to be able to go on a mountain gorilla trek. 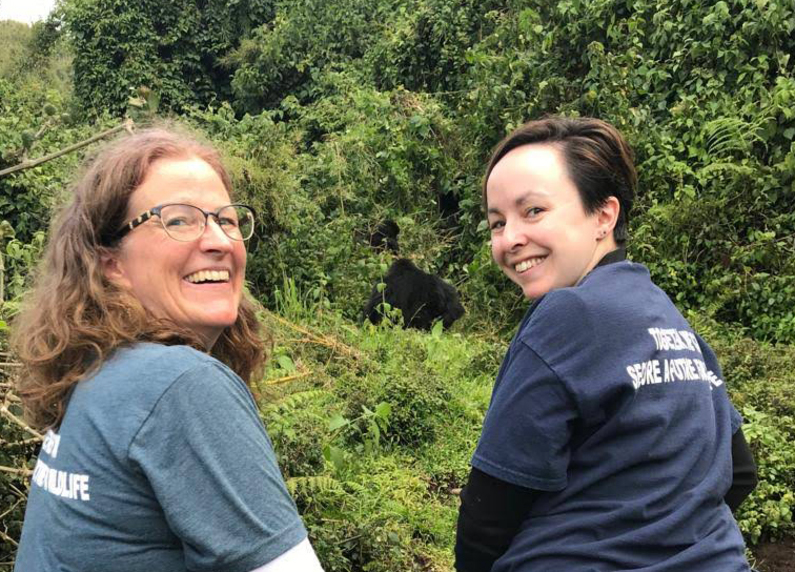 The day was warm and sunny, not a cloud in the sky. The drive to the park was early but I was wide awake and full of anticipation. The African Tea at the base camp was milky and not too sweet. The walk through the fields to get to the park boundary was warm, but inside the park was cool and muddy, as we worked our way up past 8,000 feet into in the sky. I knew the moment we were near the gorillas – we could not see them yet, but, it turns out, I would know that scent anywhere in the world. I turned to Kristen. I smell them, I whispered in awe. She nodded back, smile hovering, eyes shining. 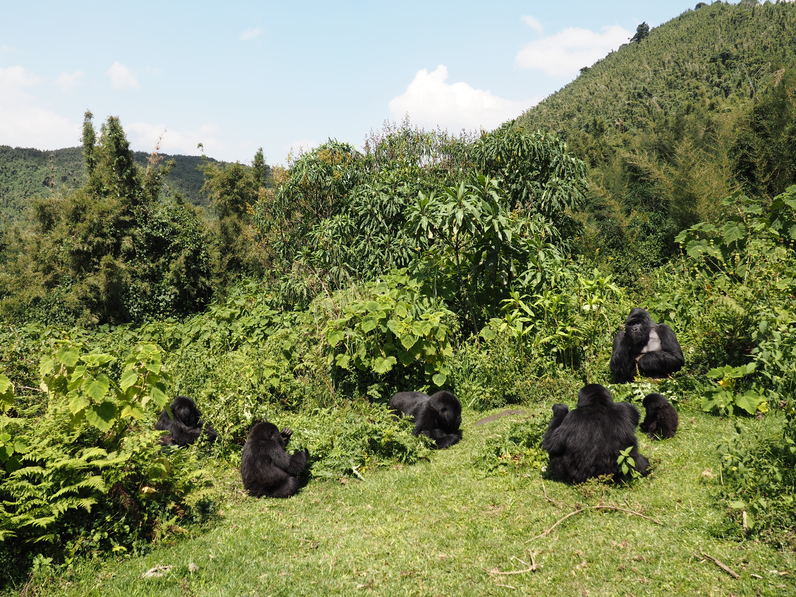 Agashya, silverback, with some of the juveniles in his group.

Earlier, I had said to Kristen that I would cry when I saw a gorilla, but I am prone to hyperbole when I am excited – I did not expect to actually sob. But there I was, watching a juvenile climb down a small tree, munching on leaves, and tears were streaming down my face unbidden. I had no words. To have studied an animal for so long, to have traveled so far, and to see them, there, living their fuzzy little lives, unaware of the chaos the humans have caused, and the hard work other humans put in daily to protect them… I stood there and cried, Kristen’s arm around my shoulders. I think the other people on our tour were a little confused, but there was no way to adequately explain the enormity of the feelings in my heart.

We moved on, and up a ridge, and it only got better. We found ourselves in a clearing, with the head silverback, Agashya, sitting behind the rest of the group, eating nettles and keeping an eye on the myriad of juveniles in front of him. The guide explained that during relaxed feeding times such as this, the females leave offspring who are old enough with the silverback, while they go off on their own to feed. When the silverback is ready to lead the group somewhere else, the females come back and pick up their kids, and everyone moves on together. For now, though, it was just Agashya and a group of young ones, seeming for all the world like a dad watching a group of kids as goofing off, as the little ones rolled in the grass and jumped on each other, occasionally shoving a leaf in their mouth as they passed a nearby plant. 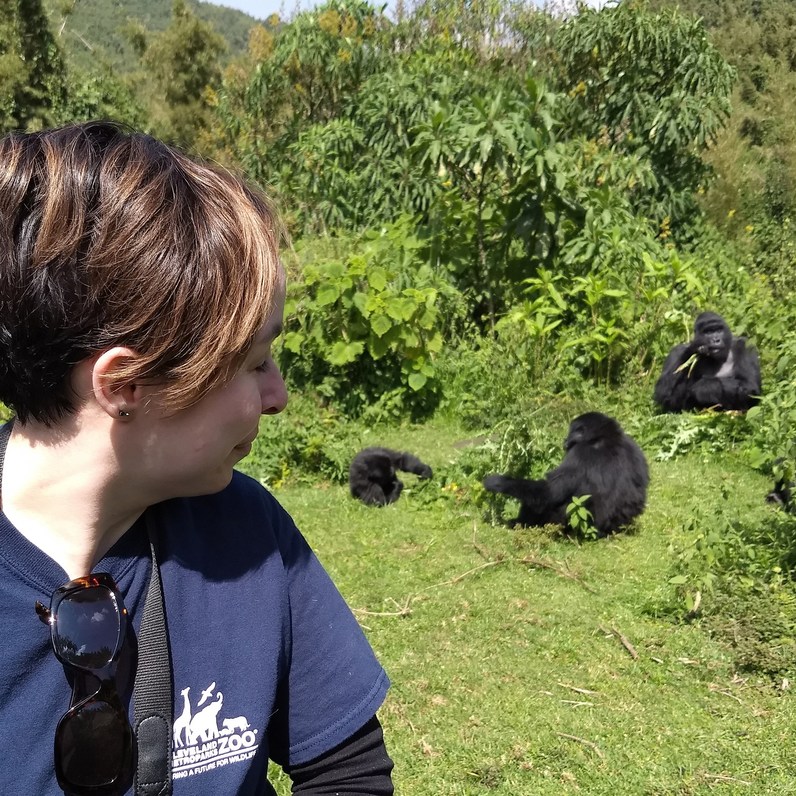 In awe that I am even here.

As some of the juveniles moved up the hill, our attention was brought to the right as a blackback emerged from the forest. Now, I am used to Western lowland gorillas, and this blackback, technically too young for his back to have turned silver yet, was at least as big as some full-grown western lowland silverbacks I have seen. The sheer size of mountain gorillas is astonishing, especially considering their diet of leaves, leaves, and more leaves. But there he was, a young male in his glory, and he plopped himself down on his stomach in front of the juveniles. He grabbed one by the foot and put it in his mouth, the little one laughing in short breaths with a wide open mouth the whole time. As he was gently rolling the little one back and forth in the grass, another one ran at his face, while a third climbed up on his back and sat. The tussling lasted a minute or two, with the soft gentle sounds of baby gorilla laughter continuing the whole time. Then, at some unknown signal (unknown to me, not to them), the big, young male got up and went back into the trees, leaving a wrestling pile of kids behind him. 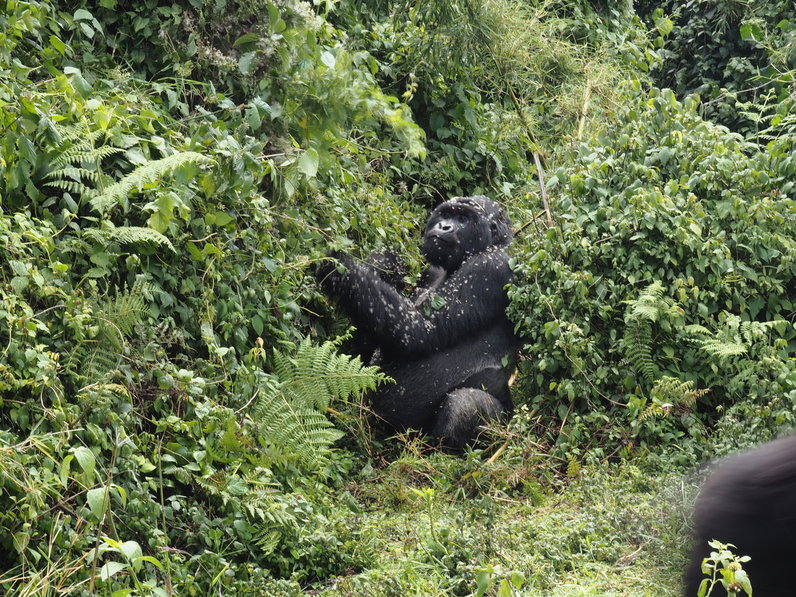 One more story. Near the end of our hour with the gorillas (was it an hour? It felt like only minutes, or maybe days), Agashya had moved up near the trees, and the little ones were again playing in the grass in front of him. There were juveniles of various sizes, from those barely more than infants to some that hulked out of the grass. One large one in particular kept coming up to the group of little ones and trying to play, reaching out and grabbing, but they kept chasing him away. The guide explained that the big one did not understand why the little ones would not play with him, but they did not like to play because he was too rough (could they BE any more like human kids?). Eventually, the big guy did get one of the smaller ones to break off and wrestle with him for a minute, but indeed, he must have been too rough, because after only a few seconds, she ran from him and rejoined the first group. I couldn’t help but laugh, even if I felt a little bad for the fuzzy oaf. Apparently some things are universal.

And then – it was over. The guide said our time was up, and it was time to leave the gorillas alone. This was their only hour of direct human disturbance for the day; no one would watch them again until tomorrow, except for the trackers, observing carefully from the cover of trees. We headed back down the mountain, we showered, we ate lunch and had the rest of our day, week, month… but I think I left a little part of myself up there, in the trees, with the gorillas in the sun.

Laura's letters from Rwanda continue in our blog on the Memoirs Program! Stay tuned.