How important is one Eastern Black rhino?

Inge arrived in Cleveland in 1997.

It turns out that one Eastern Black rhinoceros at the Cleveland Metroparks Zoo has been very important and continues to become more important as an ambassador for her species. Inge, the matriarch of our herd, arrived in 1997 from South Africa with great hopes to help increase the population of Eastern Black rhinos. It took a great deal of cooperation between the Addo Elephant Park, the government of South Africa, the Cleveland Metroparks Zoo and the Cleveland Zoo Society to bring Inge to Cleveland.

Cleveland Metroparks Zoo is a member of the Association of Zoos and Aquariums (AZA). AZA is the accrediting agency of zoos and aquariums in North America and has 238 member institutions. Of these institutions, only 26 zoos have Eastern Black rhinos.

AZA maintains “studbooks” on each species. The studbook has details on each individual animal’s husbandry – where they were born and when, who their parents were, when they have offspring. This helps Zoo directors and animal care teams keep track of genetics and health and guides population management among AZA zoos. The AZA 2020 studbook for Eastern Black rhinos shows the current population in zoos across North America to be evenly split 30 males and 30 females. The studbook shows a slight gain to 60 from 57 rhinos in the 2017 studbook, but it is still down from 97 rhinos listed in 1997 when Inge arrived.

Inge is still the only living African-born Eastern Black rhino in an AZA facility. All other rhinos in the AZA population are captive born. There have been seven births at CMZ in the past 23 years; Inge has had five calves and her daughter Kibibbi has had two calves. Azizi, one of Inge’s other daughters has had two calves at the Pittsburgh Zoo. This means that Inge and her two generations of offspring total 10 rhinos or 16% of the 60 rhinos in the AZA facilities. This has been a major contribution to the Eastern Black rhino population!

The increase of space in the Daniel Maltz Rhino Reserve is a major habitat improvement for the Zoo’s rhinos. Your Zoo currently has one of the largest “crash” of Eastern Black rhinos in AZA facilities in North America. (Yes, CRASH is the proper term for a group of rhinos.) Both the Lincoln Park Zoo and The Des Moines Zoo also have four black rhinos. Brookfield Zoo near Chicago, Zoo Miami, Pittsburgh, Sioux Falls, and St. Louis zoos all have three rhinos. The other 32 rhinos are spread out in 18 zoos. 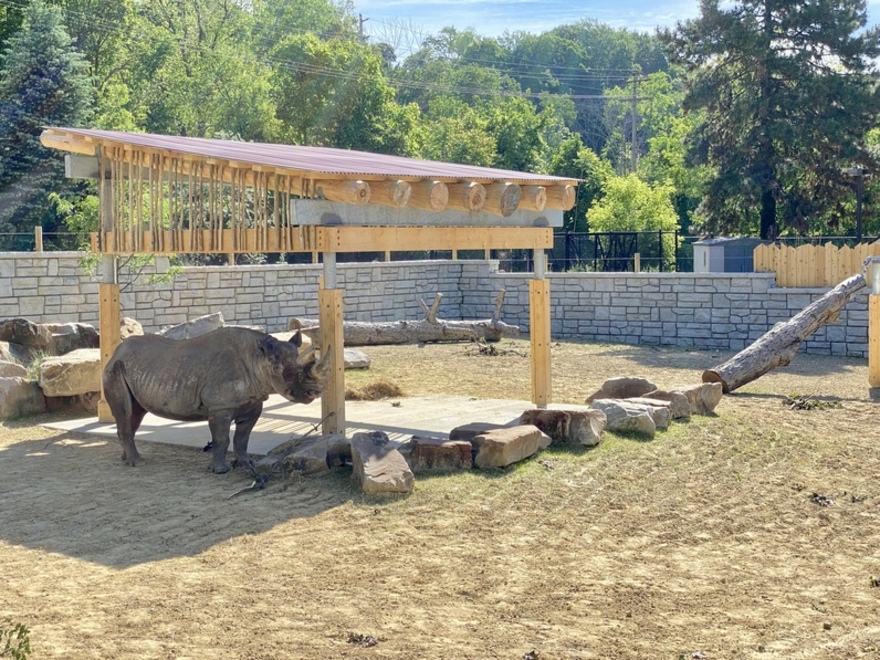 The Eastern Black Rhino is listed as critically endangered by the IUCN, with approximately 740 left in the wild, and is the rarest of the remaining rhino species. How special that Cleveland is home to this important species.

This feature was written by Paul Webster, a longtime Zoo volunteer and donor. His favorite animals are elephants and rhinos, and he has a soft spot for Inge.