When you’re visiting The RainForest, make sure to follow your nose to the 2nd floor Researcher’s Hut. There you will find one of the Zoo’s newest residents, Jenna the binturong! What is a binturong and why does she smell like a movie theater? Here are some fascinating facts about this fragrant mammal. 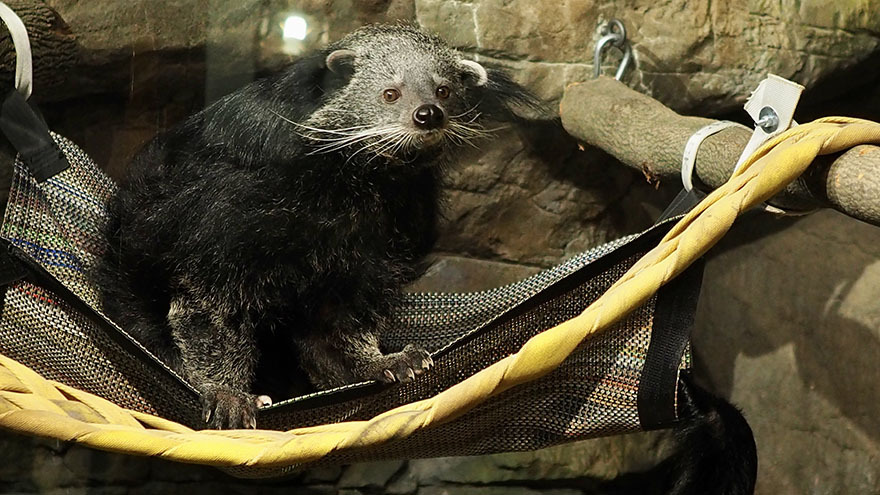 Jenna in her new habitat in The RainForest


Jenna’s keeper actually thinks she smells more like Frito corn chips, but binturong definitely have a unique odor. Curious. Researchers first thought a scent gland under their tail was the source of the snack-like aroma, but recent studies found it was a chemical (2-AP) in the binturong’s pee that was the source. The chemical 2-acetyl-1-pyrroline, is the same chemical created during the popcorn-popping process. After going to the bathroom, the pee soaks onto the animal’s feet and tail, and as they amble along tree branches, they are marking their territory, and if the timing is right, letting potential mates know they’re nearby.

Binturong live in the forests of Southeast Asia, and are rarely seen on the ground. Despite a long monkey-like tail however, they cannot jump from tree to tree, so they will climb down one tree and walk over to the next, then climb up. Their flexible ankles allow them to climb down the tree headfirst! 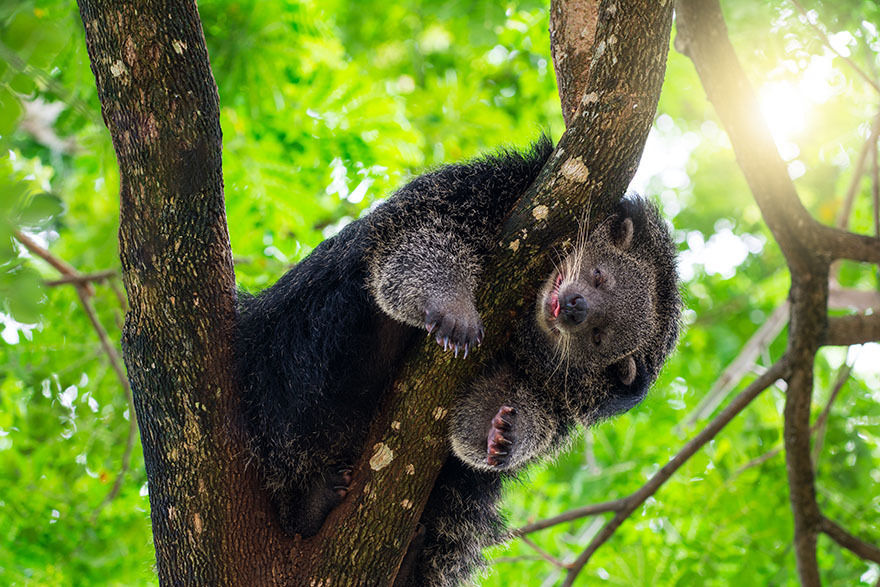 They are a keystone species.


A keystone species is one that has a large effect on the environment around it. In the case of the binturong, it has a special relationship with the strangler fig (Ficus altissima) and is one of a few animals that has the digestive enzymes capable of softening the outer layer of the seeds. After the binturong eat the fig fruit, the seeds left in their poop are in a form ready to germinate. Stranger figs make up a critical portion of the canopy in Southeast Asia – and without the binturong, the canopy would be in trouble. 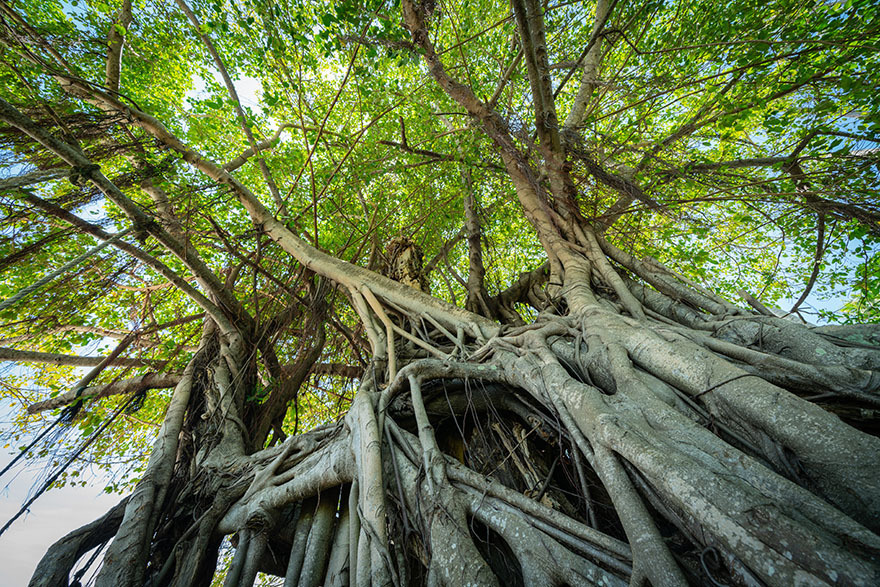 The strangler fig makes up a large portion of the rainforest canopy in Southeast Asia.

They have a prehensile tail.

Binturong are one of only two carnivores with a prehensile tail, meaning it can grip things (the other is the kinkajou). It moves slowly through the trees using its tail like an additional limb. 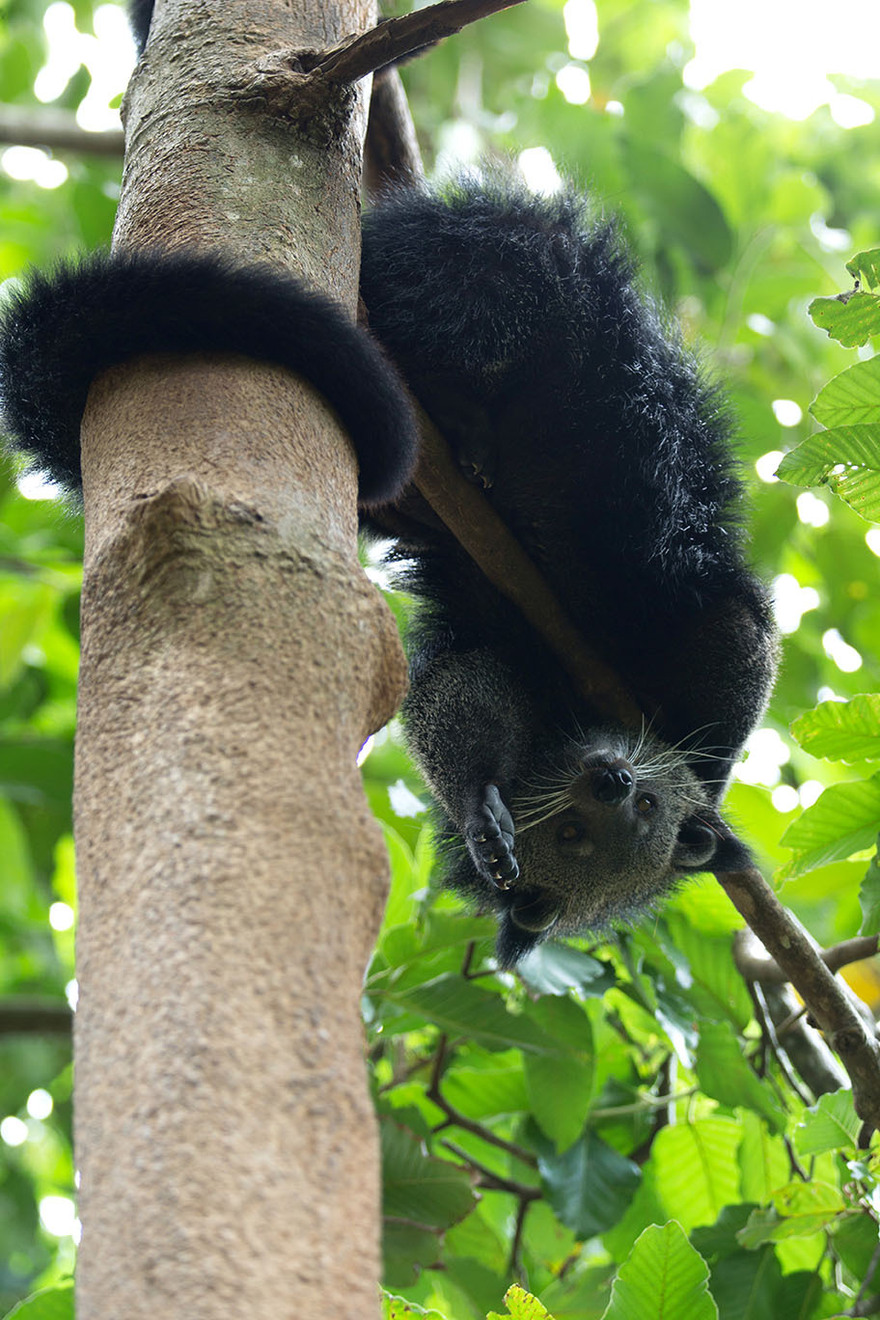 In the wild, they have a varied diet of berries, eggs, fish, plant shoots, and strangler fig.

At the Zoo, Jenna’s favorite foods are bananas, grapes, and fish. 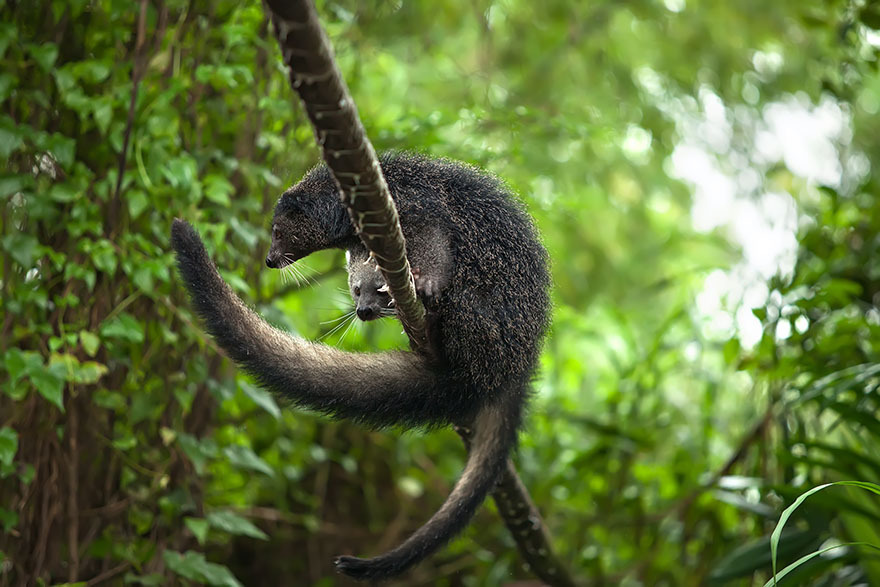 They are a vulnerable species.

According to the IUCN (International Union for Conservation of Nature), the main threats to the binturong are residential and commercial development, deforestation for agriculture, and the illegal pet trade.


They are commonly referred to as a bearcat.

In actuality, they are neither a bear nor a cat. Binturong are part of the Viverridae family, which includes civets and genets. They are stocky however, and move like bears when on the ground. Their face looks cat-like too, so “bearcat” accurately describes the physical features of the binturong.

There hasn’t been a binturong at Cleveland Metroparks Zoo since 2002. You’ll find Jenna on the 2nd floor of The RainForest.