Ask the Expert: How do you acclimate an animal to a new habitat?

Behind every animal habitat at Cleveland Metroparks Zoo is a well-thought out process for all aspects of animal welfare, including acclimating animals to a new space. “Many times we are also working with additional factors, such as weather and neighboring animals already in the habitat,” Jen DeGroot, Associate Animal Curator.

For animals like Luka, Anya and Indrah, the tiger cubs, it began before the cubs were even in their new habitat at Rosebrough Tiger Passage. “While the cubs spent their first few months behind-the-scenes, they were given items they’d find in their new habitat, such as wheat grass sod and piles of snow,” says DeGroot. 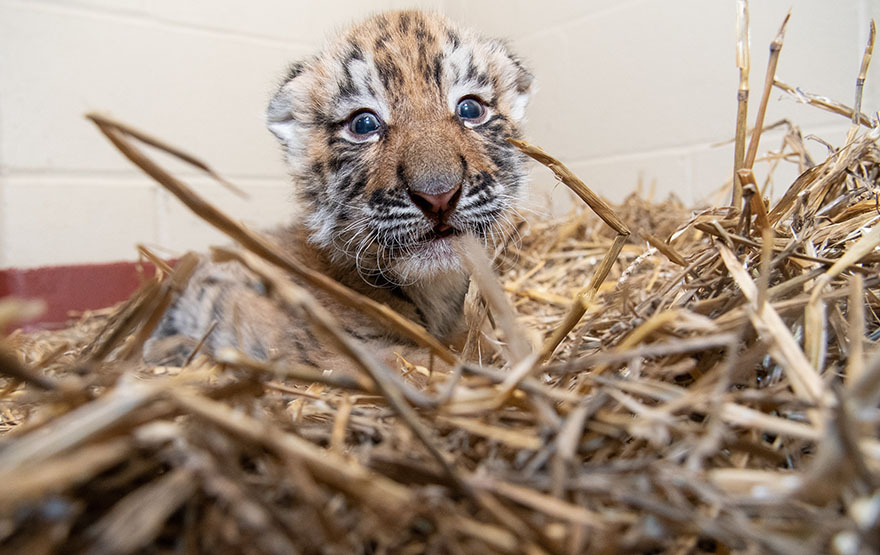 Even though the adult tigers at Rosebrough Tiger Passage would not be sharing the same exact space with the tiger cubs, the Animal Care team took special care to make sure everyone involved was familiar with their new neighbors. Both the cubs and the adults were given bedding used by the others so all the tigers could familiarize the scents before the cubs made the move to the habitat.

In other areas of the Zoo where new animals will be sharing the same space with resident animals, the Animal Care team starts off with visual access. Also called “howdy,” keepers will allow animals to visually see each other through mesh doors or windows before putting them together.

Visual items also help with safely acclimating an animal to their habitat. You may see blue painters’ tape on viewing windows, which may indicate a new animal is at the Zoo. Items like tape or fence flags help identify a barrier an animal may not see right away so they do not accidentally run into it. 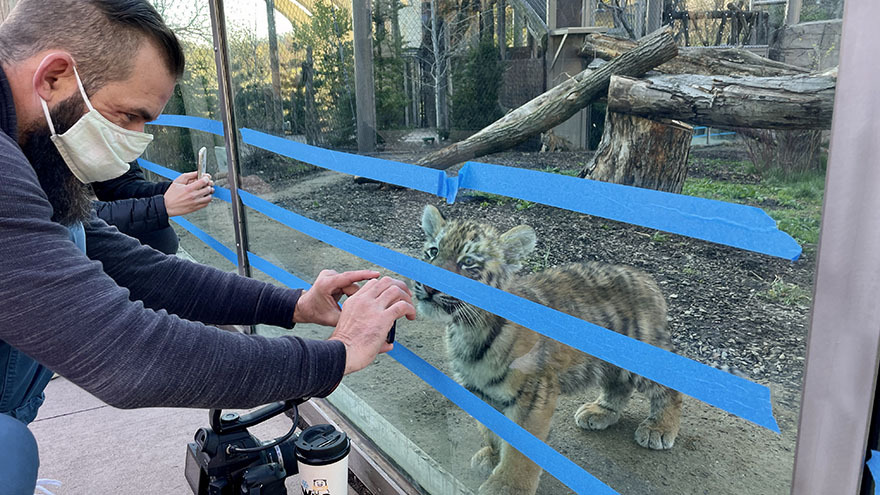 Blue tape on the glass lets the tiger know there is a barrier present.

Another helpful way for animals to become familiar with their new surroundings is to take introductions at a slow pace. New animals will have in/out access to their holding space while they become fully comfortable with their outside habitat. It’s also important not to give too much all at once. Keepers will steadily increase access to new spaces one at a time, so the animal is not overwhelmed. 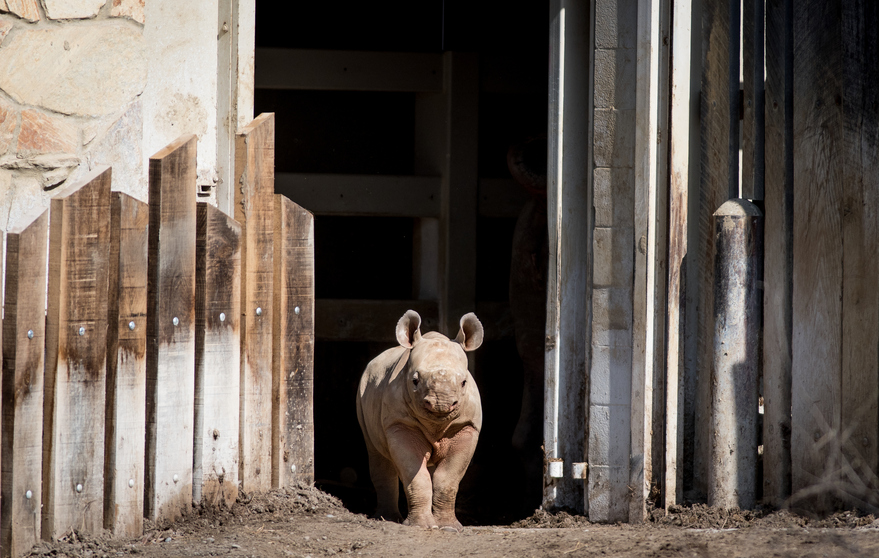 The rhino calf had both indoor/outdoor access while it was getting acclimated to the habitat. Photo courtesy of Kyle Lanzer, Cleveland Metroparks.

“Luka, Anya and Indrah gradually received access to more spaces this spring and summer,” says DeGroot. The yards with pool features had lowered water levels as the cubs learned to swim while staff kept an eye on them. They’re now masters of their outdoor yards - you may even see the cubs playing and using enrichment items the adult tigers use.

Weather is an interesting, and potentially dangerous, factor that the Animal Care team must keep top of mind. When possible, staff do their best to time habitat introductions with the proper season. Wilderness Trek keepers waited to give Norman, the tufted deer fawn born in 2020, outdoor access until there was no ice. Since tufted deer fawns aren’t stable on their feet right away, there was a risk of slipping and injury if Norman were around ice at such a young age. 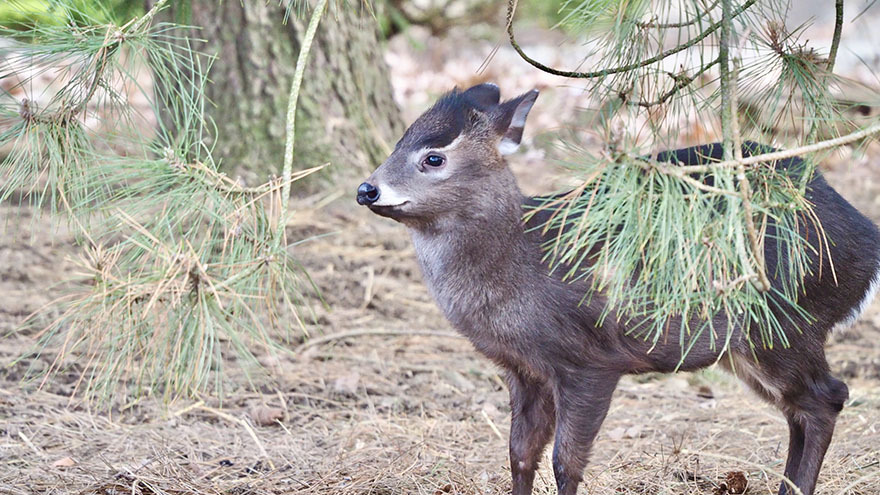 Norman the tufted deer, outside in the habitat.

Many animals at the Zoo have temperature parameters surrounding their care. Indrah, the Malayan tiger cub, has a parameter of >32 degrees Fahrenheit. Animal Care staff waited for warmer temperatures before giving the tiger cubs outdoor access for the first time to accommodate Indrah’s natural habitat of tropical Malaysia.

Birth plan A through Z

Did you know behind every animal birth at the Zoo is a well-thought out plan? Before an animal is even born, the Animal Care and Veterinary Services teams create a “birth plan” which covers every aspect of the pregnancy, birth and beyond. The teams discuss every possible scenario and how the staff would handle multiple situations, including introductions to the rest of the group (if applicable).

Pulling the tiger cubs for hand rearing in December 2020 after Zoya did not display proper maternal care was one of the teams’ last resort options in the birth plan for this tiger pregnancy. Because the decision was necessary to ensure the best chance for survival of the cubs, the birth plan for that scenario meant it was likely the cubs would not be reintroduced back to Zoya. 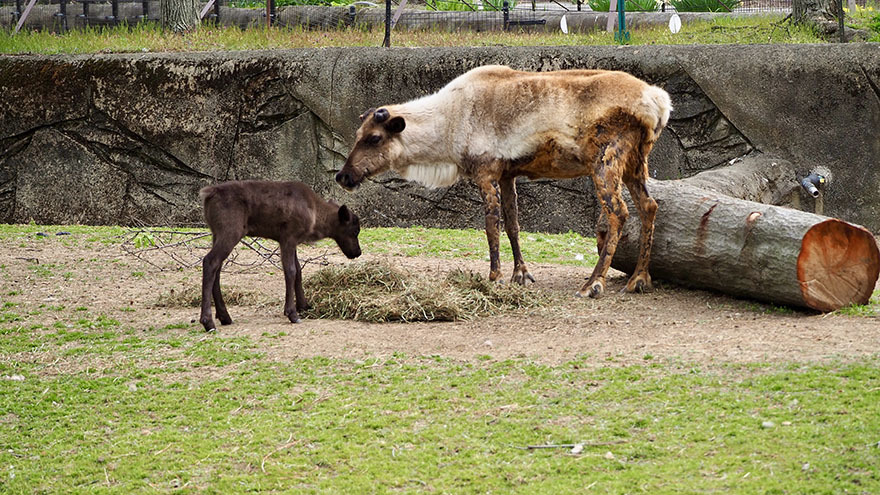 Finnick was born in 2021 and was introduced to the herd quickly.

Birth plans are specific to the individual animal species as well. Finnick, the male reindeer calf born in April 2021, was introduced rather quickly to the rest of the reindeer. Herd animals, like reindeer, do best when in social groups with others of their kind. Introducing a calf like Finnick to the rest of the herd very early on made sense for the welfare of the calf and the entire group.

The next time you visit other new animals at the Zoo, see if you can identify any of these acclimation or introduction techniques at work!